Castro has resigned from power

Fidel Castro Says He Has Resigned
"Cuban leader Fidel Castro said Tuesday that he will not return to lead the country, retiring as head of state 49 years after he seized power in an armed revolution. The announcement was posted in a letter to readers on the website of the state-run newspaper Granma." Source: The New York Times Tuesday, February 19, 2008 -- 3:01 AM ET. Read More: http://tinyurl.com/3xnz4b

This subject got me to thinking about our ancestors and how they may have adapted to changes brought on by newspaper headlines, politics, war, food shortages, floods and other man-made or natural disasters. I imagine they were much the same as we are – human in our responses. Perhaps they lived lives with more uncertainty, due lack of efficient communication methods. Maybe it was blissful ignorance, until disaster struck close to home. 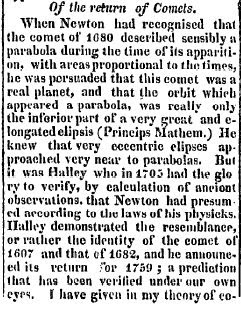 Our ancestors had similar fascinations with things celestial, if the following newspaper posting is any indication. This article was one of 130,391 hits following an advanced search for the word “comet” without quote marks in GenealogyBank.com’s Historic Newspaper Collection this morning. I specified publications created between 1800 & 1900 to exclude modern commentary. Source: Comets. to the Editors of the Nat. Intelligencer. Date: 1817-09-06; Paper: The American Star. Copyrighted by NewsBank and/or the American Antiquarian Society. 2004. Posted in GenealogyBank.com's paid subscription database, viewed 18 Feb 2008.
Obituaries can list peculiar connections to historical events such as this posting from The Philadelphia Inquirer:

"The last known survivor of the 1889 Johnstown Flood, one of the worst natural disasters in U.S. history, has died at 108. Frank Shomo was just 100 days old when the earthen South Fork Dam in Cambria County collapsed and released a wall of water that killed 2,209 people in southwestern Pennsylvania. The deluge swept through Johnstown and traveled 20 miles down the Conemaugh River valley to the Indiana County community of Robinson, where Shomo's family lived. Shomo died in his sleep Thursday at Blattenberger's Evergreen Manor." Source: Deceased Name: SURVIVOR OF 1889 FLOOD DIES AT 108 - FRANK SHOMO WAS AN INFANT WHEN THE WATERS SWEPT JOHNSTOWN, KILLING 2,209. The Philadelphia Inquirer (PA) - March 22, 1997. Copyright (c) 1997 The Philadelphia Inquirer. Posted in GenealogyBank.com's paid subscription database, viewed 18 Feb 2008. 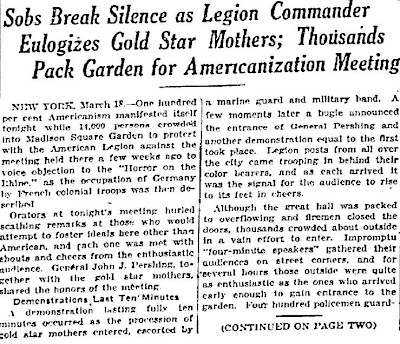 Using old newspapers in genealogical research, and presentation to family members goes a long way toward putting our ancestors in historical perspective. BRAVO to GenealogyBank.com, a division of NewsBank.com for making this huge collection available to researchers. See Historical Newspapers 1690 - 1977 & the title list to this collection of over 108.6+ million articles, obituaries, marriage notices, birth announcements and other items published in more than 500,000 issues of over 2,400 historical U.S. newspapers. Director Thomas Jay Kemp tells Ol' Myrt here that new content added monthly.

Ol’ Myrt here is off to the Family History Library for another day of research on the British Isles floor. Yesterday I found the 1780 Church of England bann and return indicating the marriage of my 4th great-grandparents Benjamin Saunders and Hannah Hudson took place on 7 Sept 1780 in Bisham, Berkshire, England. Both were listed as being members of that parish. Since the microfilm includes christenings, marriages & burials back to the mid-1500s, hopefully I’ll uncover a few more names and generations for my family tree. But alas, the handwriting is cryptic, and there is a lot of "bleed through" of ink from the other side of each page. That's the fun of research, isn't it?