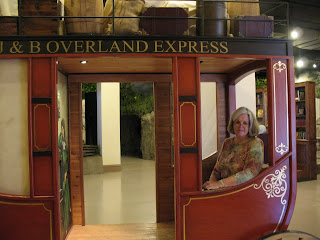 DearREADERS,
How's the research coming along? Got your ox in a ditch? Are you stuck in the doldrums? Let's take a moment to reflect on matters.

Do you think in our frantic search for ancestors, we miss the mark because we fail to plan from a logistical or financial point of view? If so, how very like our ancestors we've become. Indeed, perhaps history DOES repeat itself, with a new twist for each generation.

OUR ANCESTORS
By handcart, Conestoga wagon, stage coach or train -- it didn't seem to matter. Folks interested in adventure and the hope of a better world moved west in the American colonies, clear through the 1800s. See above: Ol' Myrt seated in a replica stage coach at the Mark Twain Museum in Hannibal, Missouri. (And I thought driving cross country by car was challenging!)

Sometimes it was the "push" factor of neighbors getting too close, or unrest caused by political or religious differences. Sometimes it was the "pull" factor of railroad jobs, the prospect of gold or cheap land. Whatever the motivation, many of our ancestors put life as they knew it behind them, and turned their faces toward what they dreamed would be a more advantageous life.

Unfortunately for most gold diggers, the pickins were slim.

For some families, preparations weren't adequate to meet the task, as members of the Donner party discovered in the wild winter of the high Sierras.

For others, it was a matter of timing that caused their ruin, as members of the Willie and Martin Handcart companies will attest. They left too late in the season to make it across Iowa, Nebraska, Wyoming and into the desert of Salt Lake. Blinding winter storms caught them in Wyoming, causing them untold misery and heartache.

For some, it was merely Mother Nature's wrath that ruined crops within days of the harvest, or forced firestorms across the open prairie threatening homesteads and small towns within reach.

OUR ANCESTRAL QUEST
Some newbie researchers "go to the gold", attempting to link with a famous historical person who just happens to have the same last name. Reverse genealogy doesn't work. We must methodically work through each generation from us, our parents, grandparents and so forth, finding clues in documents created at the time those individuals lived.

Some are frustrated by the prep time it takes to get from "Point A" to "Point B" in their research. Without an official birth or christening record, some researchers jump to hasty conclusions, assuming an older someone in the area by the same name must certainly be the father of the known ancestor. A little more research, canvasing surviving records may or may not lead to an argument supporting a relationship theory.

Some expect things to be "free" on the internet and balk at the idea of ordering things like a complete US Civil War Pension file because it will cost some money. Never mind that all sorts of additional information about a soldier and his family will most certainly be contained therein.

SO WHAT'S LEFT?
The thrill of the hunt.

The joy of discovery.

The true grit and determination to locate:
SO, DearREADERS, how is your journey thus far?