Life During the Civil War 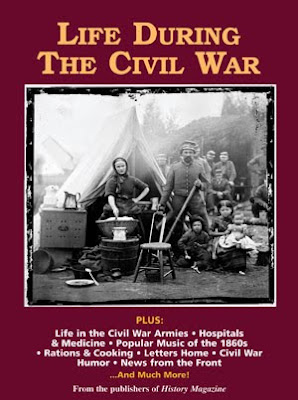 DearREADERS,
As luck would have it, the day before Ol' Myrt received a .pdf copy of this book, her husband came home excited to show off a new book on his favorite subject!

Life During the Civil War is the latest offering from our friends at FamilyChronicle.com and history-magazine.com, and author David A. Norris is one of Ol' Myrt's personal favorites.

Anxious to expand on my study of US Civil War medical practices, I turned to pages 55-61 and found a fair synopsis of how our ancestors endured injury and illness because of meager supplies, inadequate staffing and and the prevailing lack of medical knowledge incident to the time period. Just when I was wondering why there was no mention of the impact the US Sanitary Commission had on improving conditions, the very next chapter tackled the topic. The layout and ratio of photos to text is similar to the publisher's magazines -- enough to keep you interested and lead you through the text without overwhelming the need for details.

A quick review of the table of contents shows the breadth of content:
Since this is a basic primer on the historical aspects of the war, there is no information on how to discover more about an ancestor rumored to have served for either the North or the South. Also missing is a bibliography of suggested reading materials either on or off the net. However the publisher explains that David is:

Sounds like David knows what he's talking about, doesn't it? I'll just bet your resident US Civil War history buff would appreciate this as a holiday gift.