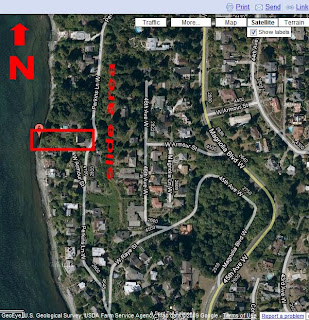 DearREADERS,
Thank-you for your thoughtful responses when asked to work with the newspaper clipping originally posted in yesterday's blog entry. Here's a smattering for your review. Those of my DearREADERS who didn't submit a reply can compare their thoughts with those expressed by others below:
From: From: C. Waldhauser waldhauser@cox.net
DearMYRTLE,
Like so many of the "old"news clippings we find in our searches -- NO -- date -- Where ? -- and what paper it came from? Keeps us searching more ? Well maybe, at least this keeps us out of trouble. haha
-----
From: Cindy Drage cdrage54@yahoo.com
DearMYRTLE,
I would describe this document as an undated newspaper clipping. What is missing is the title of the newspaper, where it was published and the date of publication. What it does give you is confirmation of your parents and an address.

DearMYRTLE,
My replies inserted below.
How would you describe it? It appears to be cut from a newspaper. A photo of not recent vintage, based on the car, clothing of the child. Based on those factors, I'd say time frame is late 1930s-late 1940s (& would probably narrow to late 1940s) that being said due to the rationing during WWII.
What can you tell about Ol' Myrt (yes, this is ME at age 3!) from the information provided? Her father's full name (missing the complete middle name, though), his profession, the fact that the father's wife (assumed mother) is living, the street address. Based on the outer clothing, I'd think it was taken during colder weather.
What is missing? The child's full name (is Patti a nickname or her real name? If a nickname, is it a shortening of her real name?), the city & state, the newspaper name & location, the date, the page of the newspaper (for an appropriate citation).
Which additional records might this lead you to review? Google for the street address.


I will assume that certain information is known (i.e., the approximate time frame for the pic, the location or a general location) which would narrow down the search parameters to either a state or a general area of the country.
Once the address is identified & the newspaper is identified, then birth records can be checked (in newspaper or churches), the father's information can be checked.
The father's occupation can be used to locate the family. If i'm right, the AMA (American Medical Association) has a directory that can be searched.
Again, once location is determined, the courthouse records can be checked (marriage records, land records, business license, other legal documentation). The city directory, if available, is an option. Would school records be available? If so, other siblings might be discovered.
-----
From: Kathryn Lester Sewsoslow@aol.com
DearMYRTLE,
I would label it: Unnamed newspaper clipping, where found, who owns and address, when found.
What can you tell: The child's name, age, parents, and street address. It looks like she is wearing a heavier coat, so it could be during a colder time period, and in the region of the country that does get cooler (I wouldn't necessarily search in Texas, Florida, etc..) You can possibly get a time period from the clothing and the car style. Someone may even be able to identify what type of vehicle she is in.
What is missing: The name, date, page and column number of the newspaper, and is there more to the story?
Which additional records might this lead you to review: What is intriguing is that her father is a doctor. I would suggest looking up the license information for doctors at the state level. This could give you leads on where his schooling took place, and may give you the town he practiced in. When you know what town or county they lived in, you could try looking in the papers during the year that Patti is 3 years old. Depending on where they lived, it looks like she is dressed in a coat, so it could be during the regions cooler time period. You could try looking for an index of names in the local paper (I've been very fortunate in using Access Newspaper Archive). I would look in the city directories, local historical and genealogical society holdings also. You might look up local hospitals to find which one he was affiliated with also.
-----
From: Glenda Holmes glendaholmes@me.com
DearMYRTLE,
This picture is a cute one of a young (probable) girl. The car has a vent window which could be helpful to date the picture, if the person, in this case, you, was not known. The caption lists her parents, but not her name. An address is listed which gives a location, if you know the town of the newspaper.
The picture also gives a sense of the happy, outgoing nature of the child. No other children are shown, which might indicate she is an only child. Her father is a doctor which would lead you to medical association’s records of that time. If the location was not known, a Google search of the address itself might help locate the newspaper.
From my monitor, I cannot tell much about her clothing, which can give clues to the affluence of the family.
I do note that the child is in the front seat, which is now outlawed.
The child's haircut seems, to me, to be from the 1950s, which is another avenue of research for dating the era (again, assuming you do not know the family).
I am sure I am missing other clues.
You were a cute kid!
-----
From: Melissa Barker kaitysmom@peoplestel.net
DearMYRTLE,
Here are my responses to the Docu-Challenge #1:
How would you describe it? A newspaper clipping showing a photo of 3-year old Patti Player, daughter of Dr. and Mrs. Glen S. Player, in the front passenger seat of a vehicle. Patti lives at 2801 Perkins Lane.
What can you tell about Ol'Myrt? She is in a car in the front passenger seat. She enjoys riding in the car and especially in the front seat. She is the daughter of Dr. and Mrs. Glen S. Player and lives at 2801 Perkins Lane. She has a very pretty smile!
What is missing?
-The name of the newspaper this was published.
-The date, page number and column this was published.
-The location that this newspaper is circulated (State, County, City).
Which additional records might this lead you to review?
-Birth records for Patti Player (this would give you a place of birth and a start on where Patti could have been living at the time of the newspaper clipping)
-City Directories for Dr. and Mrs. Glen S. Player and also listings for Dr. Glen Player's medical practice
-Deed records for Dr. and Mrs. Glen S. Player to establish when they obtained the property at 2801 Perkins Lane
Melissa Barker
Professional Genealogist for Tennessee and Kentucky
Visit My Website: www.freewebs.com/genealogyservices
-----
From: AnnL7777@aol.com
DearMYRTLE,
It is a clipping from a newspaper.
The paper has space for local-interest items. The name of the child and her parents are given. Their address is given. The child's name is given. She is a white child, probably middle class, lively and friendly.
The newspaper's name, its locaton and the date are missing.
The name of the town or city is not given.
I've met you,so I know your approximate age. Your parents may or may not appear in the 1930 Census. I looked on Ancestry and found a Glen S. Player, in Seattle, age 11, which means he was born about 1919. This is a good match since I know that your elderly parents recently died in Bellevue, WA.
I'd check the SSDI (Social Security Death Index) Seattle and Bellevue papers for an obituary. I'd double check in some of the Seattle City Directories for the 1950s for his name at that address.
That's a start.

SO, DearREADERS,
Ol' Myrt here will give you the rest of the story, in true Paul Harvey style.
This picture of me in yesterday's blog entry was taken in the front seat of my mother Barbara’s car and was published in one of the Seattle newspapers, perhaps the Seattle Times or the Seattle Post Intelligencer. Since I was born in 1951,that would put the publication date at sometime after January 1954. My parents were still married at the time. I remember vividly the red corduroy coat and the big buttons. My mother cut my bangs.This picture was apparently before she gave me a Tony Home Permanent on the outside south steps of our home, built by my father Glen Shirl Player, MD on property he purchased for about $10,000 shortly after I was born. Not pictured is my brother Michael, born in December 1952. I remember when we lived in this house (we didn't move away when I was ready for 1st grade) that one time, when winding down to Perkins Lane, the passenger side car door opened, and Mike nearly slipped out, except that I was able to catch him and hold on until my mother stopped the car.
Ph. D or MD?
It never occured to me that "Dr. & Mrs." would lead someone to consider my father had a Ph. D. in something, since I've only known him as a physician and surgeon. This is a classic example of how my own experience clouds my description of something. This is something all researchers should avoid.

GOOGLE SEARCH FOR ADDRESS
Since two of you thought to Google for the address, I thought I'd do it for ya. The responses did NOT list our true address at the time 7801 Perkins Lane, Seattle, Washington which was guessed at correctly by Lynn. (Did you recall I have spoken of Seattle many times in past columns?) Google Maps only thought about:
This database is a compiled index to millions of Americans who have been profiled in collective biography volumes such as Who's Who in America, Women of Science, Who's Who of American Women, National Cyclopedia to American Biography, Directory of American Scholars, and American Black Writers. It includes information first published in the nineteenth and early twentieth centuries. In addition to providing the individual's name, birth, and death dates (where available), the reference to the source document is included." The BGMI index entry for my Dad reads:

THE RANDOMLY CHOSEN WINNER?
The 4GB Flash Drive goes to Merryann merryann@palmersrv.com. Merryann, if you would email mail me privately with your snail mail address, I'll have Amazon.com send one out to you immediately. Congrats!