DearREADERS,
A little "view map" option on this Ancestry.com census summary page (index page?) caught Ol' Myrt's eye just before I clicked to view the 1930 Wenatchee, Chelan, Washington census enumeration featuring my mother as a toddler in the household of her parents, reported in Case Study: McDonnell Part V- 1930 US federal census.

But there is a BIG PROBLEM with the "view map" option provided by Ancestry.com. There IS a possible FIX, but let's read on...

Viewing Current Maps for historical entries?
Don't get me wrong -- it is always interesting to attempt to plot an ancestor's location on a current map provided you understand this isn't the historical context we're all seeking.

IF you are lucky, and IF maps at street view at Google Maps (or a future version of Bing.com Maps), may show the EXACT HOME indicated in a US Federal Census (1790-1930) still exists for your ancestor in 2009. Even if there IS a home with the same address, you'd have to do a lot of research to determine it is the same one that has been there for decades since your ancestor took up residence.

Even if NOT, a current day map may still be a good idea to get the lay of the land for rivers, mountains and the like.

But a more likely scenario is that during the 80-130 years since your ancestor lived someplace, the town has changed a bit. Rivers do change their courses, and interstate highway systems cross-cross the nation where once only wagon ruts marked the lone prairies.

The BIG problem with the "view map" option provided by Ancestry.com (with a link to Bing.com maps) -- is that it unfortunately points to the county as if it were the town.

From the Ancestry.com website indexing my mom's entry in the 1930 census index:

So when Ancestry.com computers provided Bing.com a request to search in it's map collection, it sent the text :

But Bing.com sees this as:
Wenatchee (part of a street name)
Chelan (town)
Washington (state)
And this is what you get - Chelan, Washington not Wenatchee,Washington. 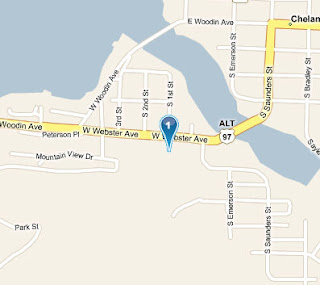 The problem became more evident, when I noticed the foot of Lake Chelan heading N/NW from the city. I knew the topography of the area, and that a river extended N/NE of Wenatchee. It was this inside knowledge that brought the problem to my attention. What about people who DON'T know the topography of this part of Washington State? 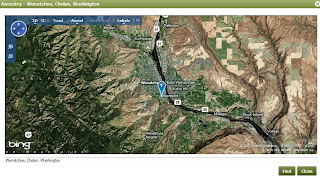 QUICK FIX
Merely resend the request manually at Google Maps (currently better than Bing Maps), omitting the county. In fact, look closely at the census enumeration, and pull the street and house number when provided.

REAL SOLUTION?
Certainly Ancestry.com coders can create a subroutine for each census to specify that only the city & state text string be sent in the request to a map site.

In the mean time, beware of the "view maps" option over at Ancestry.com's census collection.