Lewis L. Terry: It pays to be thorough

DearREADERS,
Last Saturday's research at the National Archives in Washington, DC proved fruitful, but I was stymied when attempting to find Lewis L. Terry's Union civil war pension file. Yes, you may recall I found his widow's pension file, but not his. And I was thrilled to review the original enlistment paper which was included in my 3rd great-grandfather's compiled military service record, also scanned and online at Footnote.com. See my blog entry Lewis L. Terry: Emotional Genealogy.

HERE'S WHAT HAPPENED
Ol' Myrt here had incorrectly interpreted the certificate number found on the index card, scanned and posted at Ancestry.com. I thought that leading number was a "1", but it is an "8". When the file Civil war pension file for certificate #104543 was pulled it was NOT for Louis [Lewis] L. Terry, but for another man. National Archives staff explained they only look at the number when pulling files. 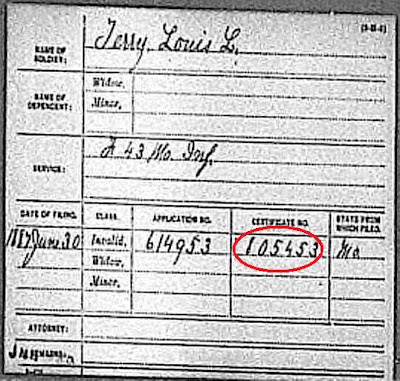 HOW DID I DETERMINE THE CORRECT NUMBER?
The widow's pension file had documents referring back to my soldier's certificate number as #805453. Sure enough, when you look at the index card above, the leading number could be an 8, but in the fuzzy microfilm scan, it's a little hard to see at first glance. The original handwriting made this "8-not-a-1" distinction very difficult to decipher.

BELOW find the widow's pension file index card. I had no idea that Lewis L. Terry had married after his wife Cynthia's death in 1878. In fact, I'm sure I would have remembered this subsequent wife's name "America J" if it had been part of my genealogy database.

But being a thorough researcher (one can only hope!) I noticed the name and military unit matched, so I requested this here-to-fore unknown widow's pension file, and discovered it contained references to the correct pension certificate number for my soldier. 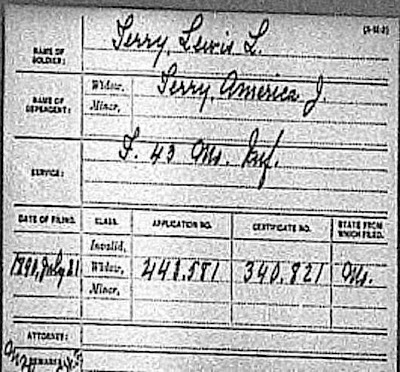 It pays to be thorough.

So I am off to the National Archives again today. Wish me luck!