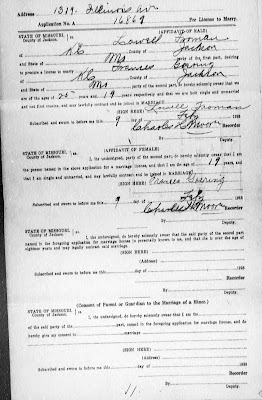 DearREADERS,
Ol' Myrt's maternal grandparents were divorced. I only remember seeing Lowell Simpson FROMAN one time in my life. When we lived on the house on Perkins Lane in Seattle, he came to visit. I remember him sitting on a black and yellow folding chair in our downstairs family room, though I couldn't have been more than five at the time.

Grandma Frances Irene GOERING was close to us, and we stayed in contact even after our move from Seattle to Rockville, Maryland in 1962. Grandma never spoke of her first husband. For us kids, grampa on that side was Dana "Mike" A. McDonnell, whom she married after meeting at Alkai Point one hot summer day. He stepped up to protect her from rabble-rousing boys who were splashing around in close proximity. I attended the guest book at their wedding, held at our parents' home, then on 55th in the Laurelhurst area, on the lake east of the University district. But I digress.

Evidence of my mother's parents was found in my mother's genealogy papers with a listing of 25 February 1925 as the wedding date. I always listed the location as "of Wenatchee, Chelan, Washington" since the 1930 US federal census enumerates them there and it is the earliest reference I had to date of them as a couple. Lower
Posted by DearMYRTLE on Wednesday, July 07, 2010