From: Roger Moffat
DearMYRTLE,
[Re: Getting the place list up to snuff] I did this on one of my databases many years ago - a database made up of contributions to the Clan Moffat Society by many, many different people that totalled over 70,000 people.

When I started there over 15,000 places in the list. Some ended in a country, some didn't, some used abbreviations for states, some didn't, etc.

It took me 2 years of [chipping] away at it on and off to get it all sorted out - not helped by Reunion (the version at that time) being particularly slow at thinking on a database that size - each change took 2-3 minutes on my iBook. I think the worst example was that "Los Angeles" was represented 15 different ways. I ended up with about 11,000 places. The results of this cleanup can be seen here:
http://genealogy.clanmoffat.org/places.php?tree=ClanMoffat

DearROGER,
WOW! I only worked through my 16,000 person database. Like you, Ol' Myrt here found lots of "creative" ways to spell or abbreviate place names. One of my favorites was Iona, Argyllshire, Scotland, United Kingdom

Some of the alternatives were:
Most of these oddities were because I imported someone else's database into my otherwise PERFECT database.

Some of the irregularities were caused because I've been working my database for so long. In the olden days with limited space for typing a place name, we really had to abbreviate as note din some of the examples below:


Somewhere along the line Ol' Myrt here ran a utility program that inserted "United States" after every state in the database. That didn't work out too well for the localities of my early Marylanders. When Christopher and Edith (Cromwell) GIST purchased property in 1679 along the Patuxent River, it was in Maryland, but the United States didn't exist at that point in time.

One must also be aware of similar sounding places particularly in far off lands with which we're unfamiliar. For instance:

ut HOW anyone thought the following entryfor a locality of marriage was worthwhile, I just don't know! Fortunately the Place List option in in my RootsMagic database permits me to edit, merge or delete such oddities. 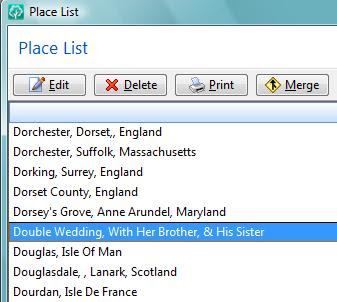 "Double Wedding, With Her Brother & His Sister". Geesh. That was some certainly party, but NOT a locality to placed on a place-sorted list.

Thanks, Roger, for sharing and encouraging others to get their place name list up to snuff!