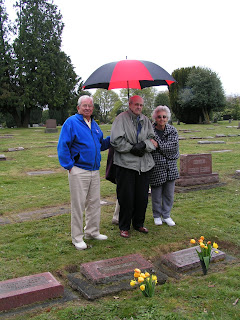 DearREADERS,
It took a bit of doing, and my cousin Carol helped out, too. This 2007 photo of (left to right) my Uncle Jack Player, my father-dad Glen S. Player and my Aunt Beverly (Player ) Muir was taken as the three siblings stood at the graves of their parents. All three "kids" hadn't been together in some 14 years, though they had met in pairs from time to time.

Naturally, Seattle put on it's best show of rain drops for the occasion, hence the big umbrella. I recall that Dad was so weak at this point that he could barely stand. The ground was too wet and uneven to accommodate his electric wheelchair, so we helped him hobble over to the graves. Dad died in September just a few months after this sibling reunion.

This is my paternal grandfather's gravestone ~ not a boy named "Sue" but one named "Shirley".

This is the grave stone of the real "Gramma Myrtle" in the family. I just play one in my blog!


The Mount Pleasant Cemetery is located at 700 West Raye Street, up on Queen Anne Hill in Seattle, Washington. These two grave sites are about where the letter "C" of Cemetery appears in the Google Map below.


I'm feeling particularly close to Dad today, as we just moved his huge Lowrey Organ from my nephew Matt's home to mine, and I've been playing full blast all afternoon from Dad's The Ultimate Fake Book

Ol' Myrt here has got to stop typing. I cannot see through the tears.