DearREADERS,
A few weeks ago, I reported on our 2-day study at the Vicksburg National Battlefield in my blog entry titled Thayer & Wood's Approach: 22 May 1863 but in a true Paul Harvey moment, you'll want to now hear the REST OF THE STORY.

Ol' Myrt here had previously posted this pic we took of a marker at the Thayer & Woods approach, where we felt Gordon's ancestor had quite possibly stood. What I've added to the picture this time around is a red box on the left side. (More on that in a bit!) On our first day's review of the battle field, we clearly did not have access to viewing a marker for the 31st Iowa Volunteer Infantry, so we settled for a marker of the known companion unit, the 25th Iowa. 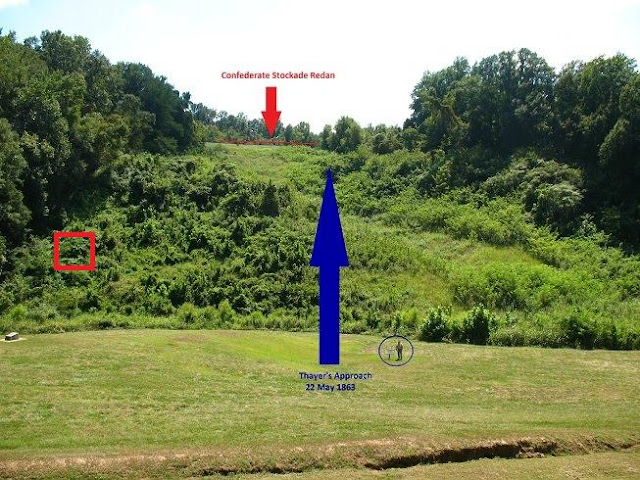 On day one, Mr. Myrt approached from the north, and is standing near the signpost for the 25th Iowa, circled in blue above.

On day two, we stood at the top of the hill in a drenching, pouring, deluge of a rain storm, where the Confederates had a series of defensive structures. But we still could not find the marker that the National Park Service employee told us was somewhere in this area for Gordon's ancestor's unit.

For some reason, we decided to go around and again view the hill from the North, and something very odd happened.

We clearly scoured the area for any evidence of additional unit marking plaques, and again we failed to spot the one for the 31st Iowa.

Dejected, and nursing my red ant bites, Ol' Myrt here sat in the car on the northern hill, watching Mr. Myrt tromp through the dampened field, when what to my wondering eyes should appear but a here-to-fore unseen marker about 1/4 of the distance up the hill from where Mr. Myrt stood. 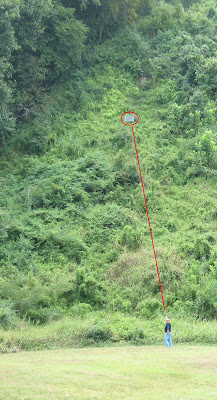 Owing to the roughness of the terrain, and the presence of great armies of red ants, climbing to view the marker was out of the question. Finally, using the zoom lens on his digital camera, Mr. Myrt was able to decipher most of the lettering on the plaque, most importantly Iowa 31st Infantry Volunteers, shown below. 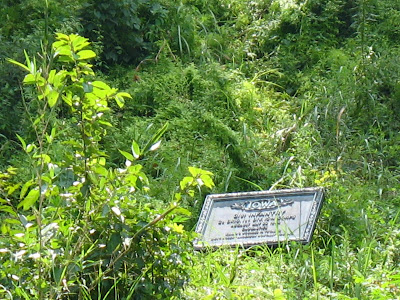 I'll never complain about the rain again, as in this case, the force of the downpour pushed aside the vines, and made it possible to spy the marker for an ancestor's unit. Pretty darned awesome, if you ask me.