My father-dad, the great hunter 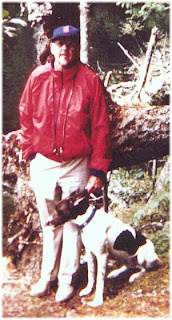 This picture of my father-dad, Glen S. Player and his trusty side-kick, Zelda, was taken circa 1984 in the wilds of Washington state's Orcas Island on one of the annual family treks through the woods to what we affectionately call "hidden lake". We 'd leave the comfort of our various lodgings at Deer Harbor or Rosario, then hike most of a morning in the shadow of Mount Constitution, passing near the "I'll give you a nickel if you go under it" waterfall and across several moss-covered logs strewn here and there across the path. (Dad still owes each of my daughters a nickel. Now with interest compounded daily... but I digress.)
If you go back far enough on the family tree, you are sure to find "hunters and gathers". My dad was just the modern day equivalent. Dad was a bird dog hunter, meticulously training his German Shorthair Pointers, Greta (Ol' Greta Ol' Girl), Zelda and finally ol' Jake (Jakie Boy). One exception to his bird hunting was the time he won the state lottery to participate in controlled population management of black bears on the Olympic Peninsula. 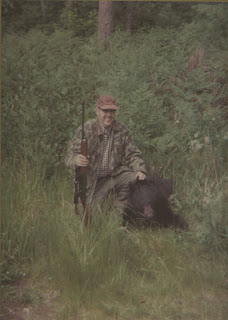 Ol' Myrt has faithfully reported the story of the resulting bear skin rug now holding court in the living room of our home in Salt Lake City.
But what I perhaps didn't make quite clear is that for all of Dad's hunting, nothing was put to waste. We as members of the immediate extended family of children and grandchildren were frequently invited to partake of roast duck, broiled grouse, and the (to me) dreaded bear jerky.


Now my brothers, being the male of the species, loved that bear jerky, though I can't understand why. They say it's a guy thing.


Hunting or bartering with hunters for food was a regular part of life for our ancestors. It was a matter of survival. Fast forward centuries, and my father remembers as a child having to go to the grocer and ask him to get things down from shelves behind the counter. No marching a grocery cart up and down the aisles like we do in modern times. "Self-help" also wasn't part of the equation when going to the meat market for my grandparents, though they lived in the modern cities of Salt Lake City and Seattle in the early 1900s.


Ever since my Dad was a little boy, he had sworn off hunting. He and a friend, each about 8 years of age, had sling shots. They traipsed around the wilds of Queen Anne Hill circa 1926. One day they took aim, and dad hit a robin, something Dad deeply regrets. It literally brought tears to his eyes as even a few weeks before Dad's own death, he recalled the terrible feeling he had when needlessly injuring the beautiful bird. He would choke on the words as shared the awful tale.

Dad credits his friend Wayne Robinson with getting him going with serious hunting. Wayne said bird hunting would give Dad time to get away from the worries over his patients, and to clear his head by walking out in the wilderness, reading the changing weather in the sky, and determining where to send his Pointer to flush out the birds. Indeed Dad seemed to thrive at the prospect of this alternate lifestyle, training his dog with twice daily hikes through Medina, Washington, a place now over-run with all sorts of .com wildlife.

Our colonial and early US ancestors had to brave the wilds to provide food for the table, particularly in the early days before farms were established and co-ops were established for trade-in-kind to augment what one household could produce on it's own.


So I guess you could say, every family's got a hunter somewhere back on the family tree. It's just that on my family tree, I only have to go back one generation to find one!