NOTE from DearMYRTLE: The following was just received from our friends at the National Archives (US). Please address all inquiries to Public.Affairs@nara.gov.
National Archives Launches New "Inside the Vaults" Video Short
Video highlights groundbreaking Civil War exhibit, Part Two to open November 10 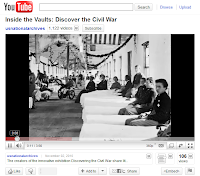 Washington, DC. . . How does the derogatory term “shoddy” relate to the Civil War?  Were hot air balloons really used for espionage?  Why were there two 13th Amendments?  And how did they differ?  Find out at http://tiny.cc/CivWar.
The National Archives today launched its eighth “Inside the Vaults” video short featuring the curators and designer of the groundbreaking “Discovering the Civil War” exhibition Part Two – Consequences, which opens Friday, November 10, and runs through April 17, 2011, in the Lawrence F. O’Brien Gallery of the National Archives Building in Washington, DC.
In the National Archives'-produced 3:56 minute "Inside the Vaults" video short “Discover the Civil War”, the creators of this innovative exhibition share little-known facts and extraordinary discoveries found in the incomparable Civil War holdings at the National Archives.  These stories are shared for the first time in this exhibition, the most extensive display ever assembled from these records.  The video also features rarely-seen original footage from Civil War reunions in 1917 in Vicksburg, MS, and 1938 in Gettysburg, PA.
Exhibition curators highlight unique discoveries from the records, while also underscoring the human cost of this war.  Will Sandoval describes daring espionage during the Civil War.  Jennifer Johnson shares her sadness upon finding a roster from a Washington, DC, orphanage that lists children and notes under “location of parents” simply the word “lost.”  “You never know what you’re going to find in the boxes of documents”, Bruce Bustard explains.
Background on “Inside the Vaults”
“Inside the Vaults” is part of the ongoing effort by the National Archives to make its collections, stories, and accomplishments more accessible to the public. “Inside the Vaults” gives voice to Archives staff and users, highlights new and exciting finds at the Archives, and reports on complicated and technical subjects in easily understandable presentations.  Earlier topics include the conservation of the original Declaration of Independence, the new Grace Tully collection of documents at the Franklin Delano Roosevelt Presidential Library, and the transfer to the National Archives of the Nuremberg Laws.  The film series is free to view and distribute on our YouTube channel at http://tiny.cc/Vaults
Created by a former broadcast network news producer, the "Inside the Vaults" video shorts series presents “behind the scenes” exclusives and offer surprising glimpses of the National Archives treasures.  These videos are in the public domain and not subject to any copyright restrictions.  The National Archives encourages the free distribution of them.
Posted by DearMYRTLE on Wednesday, November 03, 2010