DearREADERS,
On this Veterans Day here in the United States, I'd like to honor two members of our family who served during World War II. We're losing those of the "greatest generation" at the rate of about 1,000 a day.

My father served in the US Army during World War II. Like many servicemen of that era, Dad didn't speak much about the war. I did verify the following information in advance of Dad's passing back in September 2007.


"A proud graduate of West Queen Anne Elementary class of 1932 and Queen Anne High School 1936; Glen organized and supported class reunions for over 70 years. Following undergraduate studies at University of Washington (1936-1940) Glen received his medical degree in 1943 from the University of Oregon Medical School, now called the Oregon Health Sciences University. He completed post-graduate studies with the School of Neuropsychiatry at New York University 1944-1945 and took related classes at Cornell. During World War II, Glen served in the US Army as a neurology consultant, England General Hospital 1945-1946; and Halloran General Hospital 1946.

At the close of the war, Glen returned to Seattle and set up his office at 1623 Queen Anne Ave North as a General Practitioner and Surgeon. He was a member of the King County Medical Society, and was a past national civil defense chair for the American Medical Association. When Glen retired he had served as a physician for 50 years, caring for the grandchildren of some of his original patients."

Dad was very patriotic. He had a flag that was posted each day on the column near the front door. Even toward the end when he was most ill, he would remind me to be sure either the flag was brought in at night, or that the front lights were shining on the flag -- as is appropriate. He remembers friends who were part of the Bataan march, and so he chose to always buy American products.

Dad's brother Jack Player served at Guadalcanal. I only learned this when Uncle Jack happened to mention it as we were going through his old family photo albums with Dad. At the time, I was caring for Dad's wife Blanche, my step-mom, as she was wheelchair bound and the travel to Jack's house was a bit too much for her. Consequently, I didn't have the chance then to ask Uncle Jack more about his unit in the Navy. Since then, I've studied more about Guadalcanal in preparation for speaking with Uncle Jack again.

Here is Uncle Jack on the left, with Dad sitting in the middle in his electric wheelchair, and then their sister Beverly (Player) Muir. This picture was taken in the early summer 2007 a few months before Dad passed away. 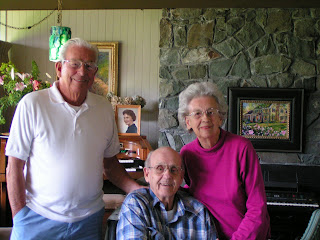 Thank-you Dad and Uncle Jack for serving to preserve our way of life. I'll never know the trials you endured to purchase that freedom for me.

And it is a small thank-you to all our men and women serving to preserve freedom.
Posted by DearMYRTLE on Thursday, November 11, 2010