DearREADERS,
Ol' Myrt here had forgotten about this July 2007 picture of my youngest grandson Tyler, lying on his great-grandpa Glen S. Player's black bearskin rug. (I've been finding pics to sync with  my new iPad.) Tyler and his family came up for our last big Player Family Retreat. Great-grandma Blanche had passed away on 26 Dec 2006, and this was to be great-grandpa's last Orcas Island trip before his passing in September 2007. 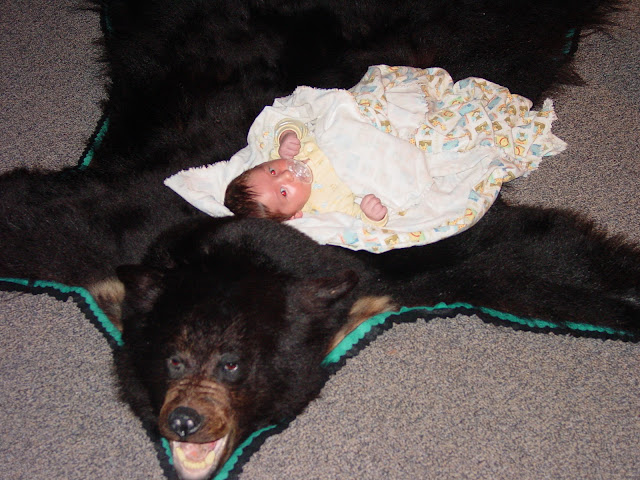 Posting this photo is a fitting follow-up to other DearMYRTLE blog entries about this rug including:


Great-Grampa's Bearskin Rug - Part 1
May 18, 2007
Well, Myrt's challenge is to explain to her grandchildren about the black bear rug in the "bear room" at Great-gradpa Glen's house, pictured below: Concept #1: Take a picture, and clearly label it before sharing it with other family ...
DearMYRTLE's Genealogy Blog: Great-Grampa's bearskin rug – Part 2
May 19, 2007
I came up with the following photograph of my father's bearskin rug as the first attempt at explaining its origin to my grandchildren. I used PaintShop Pro (similar to Adobe's Photo Shop) to add the text to the digital image
Great-Grampa's bearskin rug – Part 3
May 21, 2007
Have we established provenance? The bearskin rug, the photo of Dad just after the shoot, and the invoice from the taxidermist might lead one to believe this rug is truly identified. But is this enough? What other things might Ol' Myrt ... 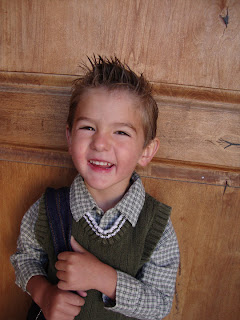 THAT WAS THEN, THIS IS NOW
That baby boy is now 3 1/2 and just went snow skiing for the first time on New Year's Day. Tyler's mom snapped the pic in September 2010 on his first day of preschool.

After Dad passed away, I inherited the bear. No one else wanted it, but I was thrilled to receive it. A place of honor is reserved for the bearskin in my living room. Now I place little candy treats in the bear's mouth to test the 'braveliness' of grandchildren, as Dad once did for my children.

Don't say it -- I know we have weird traditions in our family.  LOL!