EVENTS Surrounding "Who Do You Think You Are? " TONIGHT 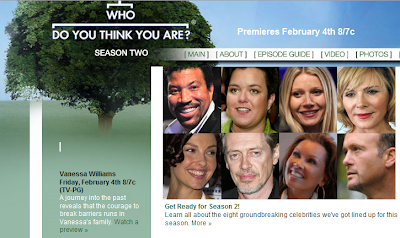 DearREADERS,
ARE YOU READY FOR SOME GENEALOGY? The Superbowl has nothing over us family historians, because TONIGHT'S THE NIGHT for NBC television's premier of Who Do You Think You Are? - Season 2. All sorts of events surround this exciting television programming.

Numbers count. We want NBC to keep this show on the air. So unless you've got a Nielsen rating box on your TV stand, make your interest known by participating in as many other WDYTYA-related events as possible.


-----
Like the WDYTYA Facebook page www.facebook.com/nbcwdytya (Remember, numbers count. We want NBC to keep this show on the air.)

-----
Discuss on my Facebook page. Here's a link to my page, where I'll post comments during the show for those who aren't into Twitter. (Note you must be a "friend" of mine to see what's posted there. Don't be shy, I'd be happy to be your friend.)

-----
Call your genealogy friends via Skype during the broadcast. Encourage each other in your online postings. Skype is free, and works best when you use a headset. YES, this can work as a conference call.

-----
Invite friends over for a viewing party. Many individuals and genealogy societies are sponsoring fun get-togethers. Why leave the salsa a chips for a mere Superbowl party?(Ol' Myrt recommends AllRecipes.com for great ideas!) Use your iPhones and iPads to post to your Twitter and Facebook pages during the broadcast. The host should have a computer nearby so guests can take turns tweeting and posting to the WDYTYA Facebook page and mention how your group reacts to various portions of the broadcast as the show airs.


-----
BLOG about it. With over 1,400 registered Geneabloggers, we form a powerful lobby ~ something folks are just beginning to realize. Use your blog before, during and after the broadcast, describing your excitement about NBC's Who Do You Think You Are? - Season 2. Mention specific segments of the episode, reactions to the research and record groups spotlighted in the show, etc. The number of viewers count and so does the volume of Facebook and Twitter posts. Believe me, the folks at NBC will pick up on your post when you are careful to include:

-----
Chat with our Geneablogger friend Thomas MacEntee in real time, for two hours following the TV show broadcast, using Blog Talk Radio. From Thomas' invitation, we read more about how this will work:

Listen to internet radio with Geneabloggers on Blog Talk Radio
-----
SO, DearREADERS, Ol' Myrt here will be "seeing you online" TONIGHT to discuss NBC television's premier of Who Do You Think You Are? - Season 2. You know you love this type of programming.

What are you doing to promote the show?