DearREADERS,
Since last summer, Ol' Myrt here has experimented with the use of Dropbox for file syncing to ease the transition between two desktop computers and her laptop. (It seems Mr. Myrt and I have done a lot of research traveling these past two years.) Dropbox also provides a useful and readily-accessible internet copy of all files. No need for backup/restore. There is a copy of everything on the internet version of my Dropbox folder. When I bought my new computer last fall, I merely installed Dropbox on the new computer. Since that computer was connected to the internet, my folders and files were copied to my new computer automatically while I was busy browsing my email.

That automatic syncing is marvelous. (I've done a lot of genealogy database work this winter on my desktop in Utah, and thanks to Dropbox, when I fire up my other computer in Virginia, the data will take only a short time to automatically appear in the Dropbox folder on that computer.)

SO WHAT'S THE PROBLEM?
Owing to varying operating systems on my three computers, the default installation of my Dropbox folder ended up in different places as follows:

my new desktop in Virginia

I've settled on placing everything on my D: Drive, so as I move between computers there will be no more broken media file links in my genealogy programs.


Moving all my genealogy files to Dropbox meant that the once-attached ancestral media files initially show up as broken links. This isn't a RootsMagic problem, but was due to the fact I changed the file locations. Over the years, as I've scanned and attached photos and source documents, each file's location on my hard drive looked something like this: (Note: Player is the surname).

Now the files reside in my Dropbox folder:

Legacy Family Tree has a built-in smart technology that "learns" where to look as you relink one or two media files, but I wasn't aware of a similar feature in RootsMagic until I attended this week's RootsMagic webinar  Sources, Citations and Documentation with RootsMagic.

SO WHAT'S THE FIX?
How did Ol' Myrt fix those broken media links in her RootsMagic database? Well, Bruce Buzbee explained during the webinar that when viewing the "Media Album" for an ancestor, one merely clicks TOOLS and then selects FIX BROKEN MEDIA LINKS as shown below: 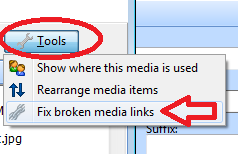 So I followed his advice. (Note: The broken link is indicated in the lower right corner of each graphic.) From there, a dialog box opened indicating where the program is searching on my hard drive as shown in this screen shot:

The first few searches took a long time, until RootsMagic "wised up" about the file location. I pushed that "wise up" technology into effect by leaving the check mark in the choice to "Use this same folder for similar files" shown below: 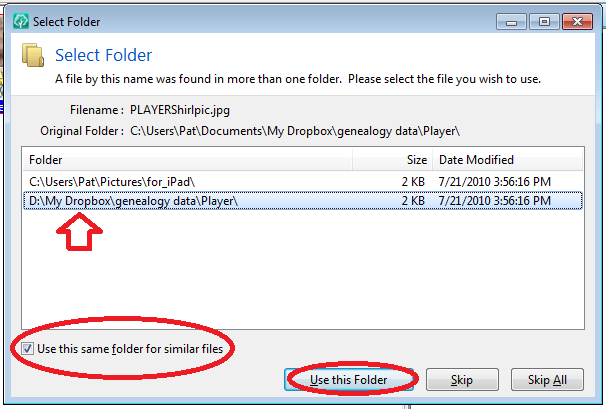 Be sure to scroll down to see links for viewing and downloading "Past Webinars".