DearREADERS,
Within an hour of posting RootsMagic: Fixing broken media file links is a snap  Michael Booth showed me an even snappier way to make the changes. Remember, the problem wasn't caused by RootsMagic. I had merely moved all my genealogy data and accompanying multi-media files to my new Dropbox folder.
BRACKGROUND
After taking advantage of Dropbox for file syncing, Ol' Myrt here had correctly changed RootsMagic's file folder locations by clicking TOOLS then selecting PROGRAM OPTIONS, then FOLDERS as shown below: 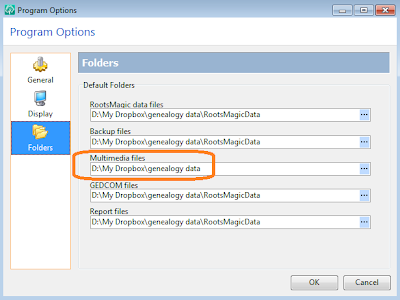 Directing RootsMagic to look for multi-media files in my D:\MyDropbox\genealogydata folder works when looking for files in the future, but the RootsMagic program continued to look for any previously attached multi-media files in their original locations. By moving all files to my Dropbox folder, I effectively broke links to hundreds of attached ancestor photos and scanned images of proof documents.
MICHAEL'S SNAPPIER FIX

"If it's something as simple as all the media files moving from one drive/folder to another, there is an even faster way [to fix broken links] in RootsMagic:

My first reaction was "Isn't this complicated since there are multiple surname folders in my genealogy data folder, Michael?"

Ol' Myrt here decided to sleep on it, and this morning the concept seemed much clearer. (Now I giggle at my initial confusion, for this is a simple process. I should just trust Mike, and do as he says, since he is vice president of RootsMagic, Inc.)
Here's how it works:
First, I created a temporary notepad document to list the original file location and the new file location, so it would be easy for me to copy/paste this info, rather than risk making a typo. Pay attention to the highlighted text below, as that is what I'll copy and paste during this process.
-----
Original file locations
C:\Users\Pat\Documents\My Dropbox\genealogy data\Player\1910PLAYERAlmawithShirley.jpg
Search and replace with the highlighted prefix:
D:\My Dropbox\genealogy data\Player\1910PLAYERAlmawithShirley.jpg
-----
Next, I opened RootsMagic 4.0, clicked SEARCH and selected SEARCH AND REPLACE, shown below: 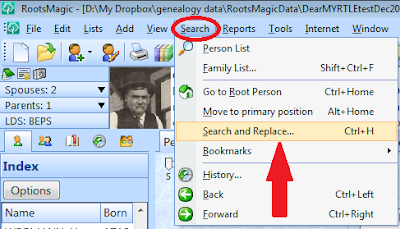 I then changed the "FIELD TO SEARCH" from "Names-Given" to "MULTI-MEDIA FILENAMES" shown below: 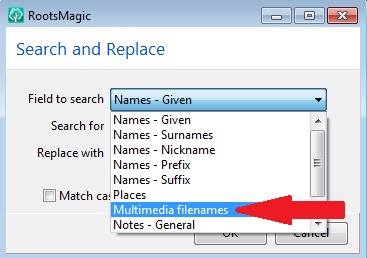 I copied and pasted the file name locations (as yellow highlighted above in this blog) to complete the fields as shown below, and clicked OK, then REPLACE all on the next (not illustrated) screen. 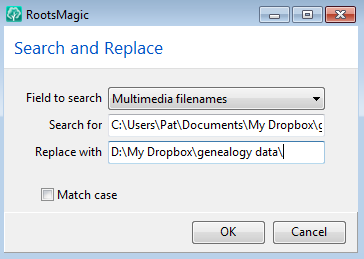 I learned what Michael already knew -- it doesn't matter that there were multiple surname sub-folders, as I only needed to adjust the "beginning" portion of the file names.
The link to this file
C:\Users\Pat\Documents\My Dropbox\genealogy data\Player\1910PLAYERAlmawithShirley.jpg
was changed to:
D:\My Dropbox\genealogy data\Player\1910PLAYERAlmawithShirley.jpg
Hundreds of other files were fixed automatically, like:
THANKS to Michael from RootsMagic.com for explaining this snappier fix to Ol' Myrt here.
Happy family tree climbing!
Myrt     :)
DearMYRTLE,
Your friend in genealogy.
Posted by DearMYRTLE on Sunday, February 06, 2011