DearREADERS,
Finally a techie conference for genealogists, where online genealogists don't have to defend their position! Understanding the importance of a digital world of resources, the RootsTech 2011 hosts provided plenty to keep participants connected. Each classroom had wired internet to the speaker's podium, and wifi for attendees.

Though wifi in the exhibit hall was called "too costly" to provide, wired workstations were available. Believe me, attendees kept them quite busy. In addition to an internet cafe with multiple wired workstations, see the FamilySearch computers (A), one of two Bloggers workstations (B) and one of two glass-enclosed video/audio recording stations (C) that enabled conference attendees and news media to "get the word out." 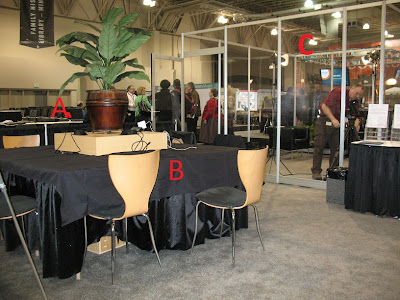 It was a GREAT idea having the Bloggers booth in roughly the center of the exhibit hall. This made it easier for vendors to stop by while keeping a eye on their own booths. Ol' Myrt here was always looking for a break in the crowd to interview a vendor. But, things were busy! At all future RootsTech conferences, vendors must bring more than one person to man a booth. Most did, this time around, and it really paid off. Those vendors were then able to send someone to a session, accept interview requests, handle email, etc. Unlike NGS and FGS annual conferences, there was no "dead time" in the exhibit hall.

RootsTech really broke through a lot of the old tried and true (they make me blue) methods for running a genealogy conference. Times are changing, and quickly. The Genealogical Proof Standard is still that... but to grab the attention of the millions of genealogists who don't yet belong to a genealogy society, we've got to shed 20th century meeting plans.