NOTE from DearMYRTLE: Only once every ten years do we receive news about old census records being released for public view. Congrats to our friends in the UK. Here is the announcement about the Scotland census. Be sure to read about an important distinction about how the Scotland Registrar General chose to handle the 1911 posted by Audrey Collins, an employee of The National Archives (UK) in 1911 Scotland, England and Wales - nearly the same, but not quite.

HERE IS A VIDEO to help you understand the census and how the population changed dramatically from 1901 to 1911 in Scotland before WWI.


Below is a sample page 1911 Scotland Census page showing the famous Emanuel Shinwell, who became a trade union official and a Labor politician. For more information about "Manny" see his entry in WikiPedia. 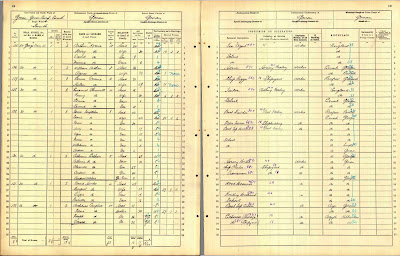 This is the official announcement from Scotland's People, the online site for viewing the 1911 Scotland Census enumerations.
1911 CENSUS RECORDS FOR SCOTLAND GO ONLINE FOR FIRST TIME
A fascinating snapshot of pre-war Scotland
and a major new family history resource
A snapshot of history from the Scotland of a century ago is revealed today with the release of the personal details from the 1911 Census.
The archives were opened after 100 years in line with the closure period for all personal data collected by each census. The Census returns were made available for members of the public to search at Edinburgh’s New Register House. Staff in period costume were on hand to provide advice and two centenarians attended to view their own entries in the Census.
From today, family historians, researchers and members of the public can view high quality colour images of their ancestors’ entries in the Census, fully searchable by name or address.
In 1911, the Scottish population was growing quickly, partly as a result of better health and the resulting improvements in child mortality rates, and partly because of immigration. Compared to the previous census of a decade beforehand, the total population had grown by six per cent.
This was the last census before the Great War, during which many tens of thousands of young people recorded in 1911 would have been killed.
Register General for Scotland Duncan Macniven said:
“We are today releasing details we have kept secret for a century, just as we are today promising to do with the information collected by the 2011 Census. People in 100 years will be able to read the information their ancestors are today contributing to this year’s census.
“The 1911 Census gives us a snapshot of what Scotland was like just before the great cataclysm of the Great War. Many thousands of the young people recorded here never returned from the battlefields of Europe.”
“For family historians, the major change is the inclusion of details of the number of children born from a marriage, which will make it easier to track children between the census years. Also, the full colour images make it easier to decipher the enumerator’s handwriting.
“You can also see what happened to Scotland in the decade before 1911. The total population was up by 6 per cent. However in Fife, for example, the population had gone up by 22 per cent, while in Orkney it had gone down by 10 per cent.
“A lot of that was due to the continuing industrialisation of Scotland, and the drift of people from rural areas into our towns and cities.”
The Census will be made available on the ScotlandsPeople website (http://www.scotlandspeople.gov.uk ), and at the ScotlandsPeople Centre in Edinburgh.  The online records will be interesting both to people in Scotland  and to the Scottish diaspora, which numbers many millions especially across the UK and in North America, Australia and New Zealand.
General background
The 1911 Census showed that the population of Scotland on the night of April 2, 1911 was 4.7 million.
This was the 12th modern census, the first having taken place in 1801.  It was authorised by the Census (Great Britain) Act 1910. The Registrar General for Scotland in 1911 was James Patten MacDougall supported by James C. Dunlop the Superintendent of Statistics.
It was the first time ever that mechanical tabulation was used to process the statistical results, which made the task quicker and easier to do. Hollerith machines were used that incorporated a punch card system.  In this census the householders were asked for more information than ever before and the new system using mechanical tabulation ensured that the statistics were reported in record time, in 5 volumes published between 1911 and 1913.
In Dalziel in Motherwell, April 3, 1911 was a holiday.  Over 2000 people were absent on Census night. Whether these people were picked up in the census in other parts of Scotland is currently unknown.
This was the last census taken prior to the first war.  Deaths in the war meant that the number of males remained around 2.3m between the 1911 and 1921 censuses, whereas between the 1901 and 1911 Census the male population had increased by 11.9%.
The police were used to help the enumerators take the Census for vagrants as well as the enumeration of people who passed the night in barns, sheds, tents, etc. or in the open air.  People on boats or barges were enumerated if the vessel was within the limits of the jurisdiction of His Majesty’s Customs.
Statistics
The main objective of a census is to provide statistical data. Reports were produced that included tables showing the population of Scotland as a whole, of its counties, civil parishes, registration districts, burghs, Parliamentary constituencies and so on.
The reports and tables were based on summaries from the Enumeration Books. No household schedules (the forms filled in by the head of each household) have survived but the Enumeration Books provide similar information to those published in 2001 from the 1901 Census and include additional information about the number of children born to each married woman, nationality and occupation.
The following statistics were produced from the 1911 Census:
Ø    The population was 4,759,445.
Ø    The number of males was 2,307,603.
Ø    The number of females was 2,451,842.
Ø    This was an increase on the population of 287,342 from 1901.
Ø    The increase in males was 133,848.
Ø    The increase in females was 153,494.
Ø    This increase was less than any since the 1861 Census.
In earlier Censuses:
Ø    The first Census, in 1801, showed a population of 1,608,420.
Ø    The 1821 population exceeded 2m.
Ø    The 1861 population exceeded 3m.
Ø    The 1891 population exceeded 4m.
Ø    The increase over 110 years was 3,151,025 or 195.9%
Between 1901 and 1911 there was an increase in population in 18 counties and a decrease in 15. The greatest increases were in Lanarkshire, Fife, Dumbarton and Renfrew. The greatest decreases were in Inverness, Orkney, Argyll and Forfar.
Posted by DearMYRTLE on Tuesday, April 05, 2011