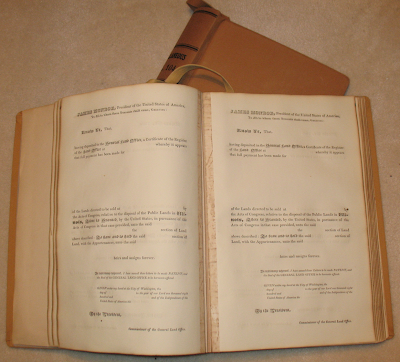 DearREADERS,
As a follow-up to Ol' Myrt's Day at the Archives here's a photo of some old General Land Office books Mr. Myrt and I picked up when visiting the Bureau of Land Management office in Springfield, Virginia recently. Seeing these large books with "fill-in-the-blank" pages makes it easier to understand why it was hard to find the records of an ancestor who may have received land from the US federal government via:
These acts of Congress were essentially designed to generate westward settlement and generate funds for the government. Another way to obtain land from the federal government was in exchange for military service. Many military bounty land records have been indexed, and are often mentioned in pension files, so finding them wasn't quite as difficult in the past.

The spines on the empty books above read:
Prior to the scanning and indexing of General Land Office books by the Bureau of Land Management, you had to know the:
By golly, if you knew all that, you wouldn't be making your request of the land office, now would you?

But fast forward to 2011 and many completed (though not all) old General Land Office transactions have been indexed with patents scanned and posted online at the Bureau of Land Office Site located at:
http://www.glorecords.blm.gov 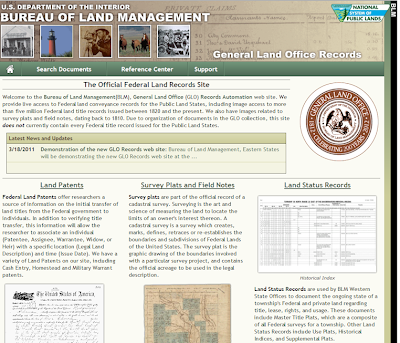 This is a work in progress, so check back every month or so. Here you may click "LAND PATENTS" and search for an ancestor anywhere in the public land states by NAME OF ANCESTOR. This is an amazing breakthrough. 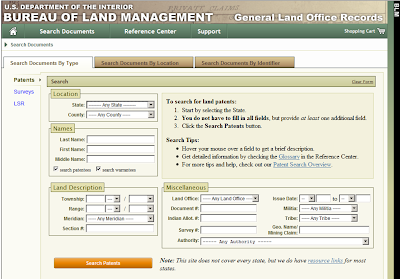 When you find a hit for an ancestor, you may click to view the image of the patent as they become available. Here is an example of My. Myrt's ancestor Arial W. Foye who in 1858 purchased land using a script transferred from military warant holder Isaac Dolph who obtained the original warrant in 1855 for his War of 1812 service. 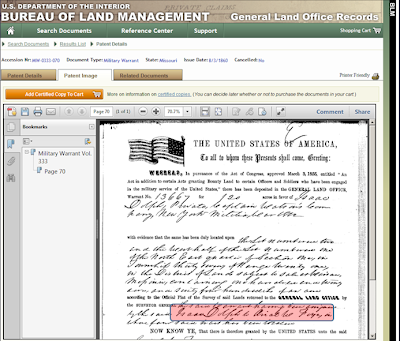 By clicking "RELATED DOCUMENTS" you can determine who owned adjoining property. What self-respecting genealogist wouldn't want to know about the immediate six to ten neighbors of an ancestor at any given point in time? 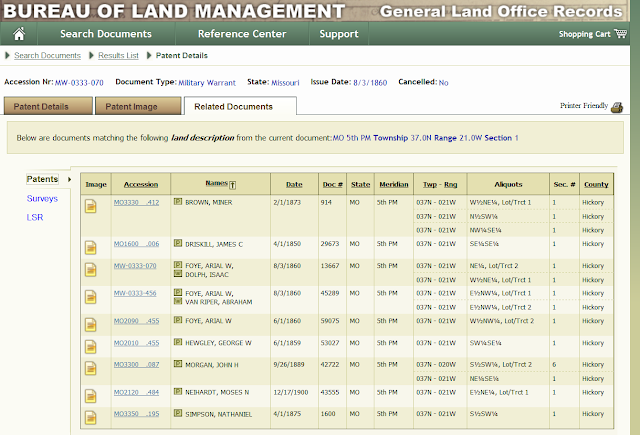 Ol' Myrt here was happy to learn that the background paperwork for this completed patent is housed at the National Archives (US). One merely prints out the "Land Patent Details" summary page from the BLM website and heads to the Archives in person, hires a professional researcher to do the look-up or orders the file online through the NARA website.

This is the "Land Patent Details" summary from the BLM website for Mr. Myrt's ancestor. Note I've highlighted pertinent parts:

Since the paperwork is filed by state, land office and document number, you'll need this information to complete your NARA request. There are also distinctions between pre- and post-1908 patents "Please note that this includes only patented or completed land entries. Those case files that were canceled or relinquished will not be there, and may contain just as much useful information for the researcher. For this information, researchers will need to access the tract books." See: http://www.archives.gov/research/land
In the case of Mr. Myrt's ancestor's file, I went to the archives personally and requested the Foye/Dolph Military Warrant, State of Missouri, Land Office: Warsaw, Document Number 13667. The clerk at the National Archives explained this was Record Group 49.

The Hollinger box label explains this was filed by:
Military Bounty Land Warrants
Act of 1855
and then by patent numbers. (13806-13909 in this case.) 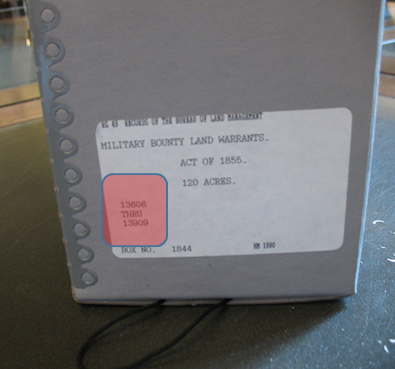 I was shocked to find the folded packets arranged in numeric order. It was the folding that totally surprised me, as these documents are fragile. 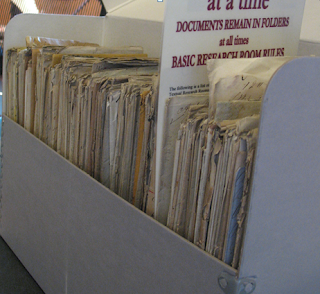 Your eyes are not deceiving you, this is very thin linen paper, perhaps thinner than tissue paper. The original 120 acre Military Bounty Land Warrant No 13667 was issued to Isaac Dolph, Private in Captain Watson's Company, New York Militia, War of 1812, highlighted in red below. (I didn't have the  heart to use one of NARA's clear plastic screens to flatten the document.) 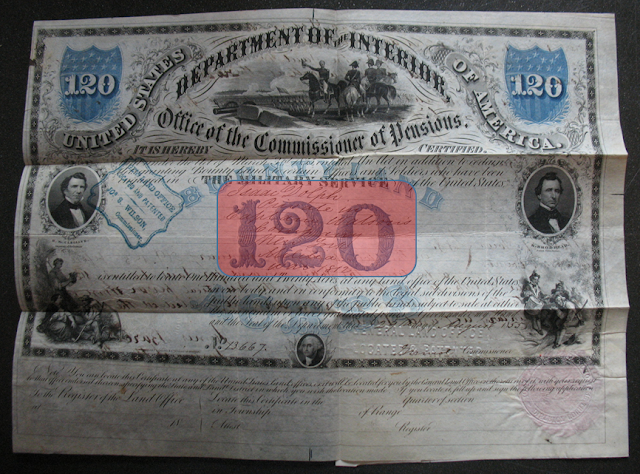 Turning the delicate page over, one can read where the warrant was assigned to Mr. Myrt's ancestor Ariel W. Foye of Black Hawk County, Iowa, who later used the script to purchase land in Hickory County, Missouri. 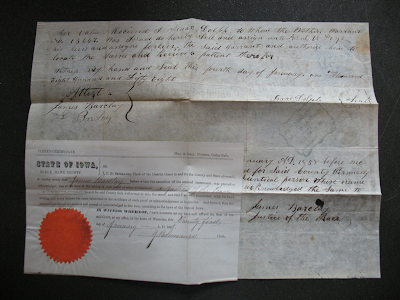 Just thought you'd like to get a peek at what ELSE is available when you find an ancestor's patent or warrant listed at the Bureau of Land Management website. And this clearly illustrates that our research should not be confined to the BLM website.

From: NARA - Land
"For land records in the remaining 20 states that were never part of the original public domain, check the State Archives for that particular state. This includes the original 13 colonies, plus Hawaii, Kentucky, Maine, Tennessee, Texas, Vermont, and West Virginia."

Other Select Topics in Land Records at NARA: