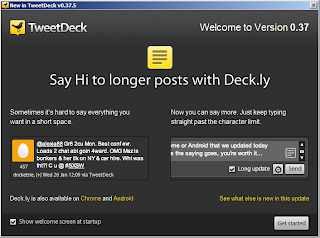 DearREADERS,
During this week's DearMYRTLE's Twitter/TweetDeck Workshop Webinar©, we learned that Twitter limits the length of our posts (called "tweets") to 140 characters. A webinar participant compared his TweetDeck console with his view of my TweetDeck console on the webinar screen and asked why my TweetDeck boxes were longer than his.
BACKGROUND
Twitter is a type of instant message service that extends beyond the tweets (posts) created by your followers (friends) but includes postings to those hashtags (categories of posts like #genealogy and #quilting) made by others you may elect to follow in the future.
TWITTER HAS ONE COLUMN FOR ALL TWEETS
Such as:
TWEETDECK PERMITS MULTIPLE COLUMNS
The advantage of multiple columns is that your tweets are better organized. For instance the current view of my TweetDeck console has the following columns:
Once Mr. Myrt got his @MrMYRT Twitter account set up, he synced it with TweetDeck and has the following columns:

It is possible to make the width of each column narrower. This is the default setting where 4 of my columns show up, the rest are viewed by using the scroll bar or scroll buttons on the bottom of TweetDeck:

By clicking the "Settings" button in the upper right TweetDeck corner shown above, one may then select the "General" tab and then add the check mark for "Narrow Columns" as shown below: 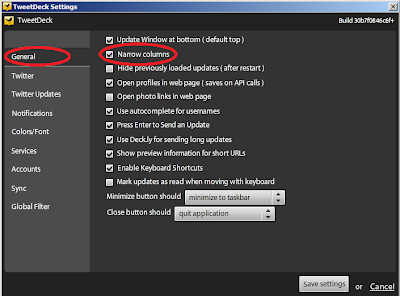 Then the result is that I can now view five columns without scrolling to the right to see the contents:

LARGER TEXT BOXES ANTICIPATE LONGER TWEETS
To make the boxes larger still, one may elect to use Deck.ly which is an option employed by TweetDeck. Enable Deck.ly by going to TweetDeck's "Settings", then the "General" tab, then add a check mark next to the phrase "Use Deck.ly for sending long updates." Deck.ly permits tweets greater than 140 characters. I still prefer to keep things short and sweet, and appreciate that TweetDeck by default automatically shortens URLs. You cannot shorten the name of a Twitter follower if you wish to send a direct message. Twitter names are just like email addresses that must be typed exactly right for the recipient to receive the post.
What other attendees said about the workshop webinar:
Ellen said:

"That was my first webinar and I enjoyed it very much.  Pity that Twitter decided to opt-out!  However, learning how to use Tweet Deck was great!  When you first mentioned it in you blog, I downloaded and signed up for twitter but wasn't sure how to work with it.  Thank you!  Thanks again.  I really love your blog and your book.  You explain things clearly, concisely and in a fun way.  I hope to attend more of your webinars.Thank you!"

"I very much enjoyed the Webinar on Twitter/TweetDeck. What was discussed & shown gave me the information needed to understand both platforms. I use Facebook, but haven't ventured into Twitter. I actively use RSS feeds & Google Reader. I'm still “thinking" about joining Twitter/TweetDeck. :). I guess I'm not quite convinced I need another social media platform. I will most likely give it a try and see. That's what I did with Facebook and I just couldn't do without it! This grandma loves seeing/hearing from family and friends and staying connected.  Thanks for the Webinar and your time! All was very, very helpful!"

DearMYRTLE’s Labeling Digital Photos Workshop Webinar©
Using PaintShop Pro, Myrt demonstrates now to add a bottom border and text to label ancestral photos and documents, and save the files with meta data describing the date, location and subject of the image. Starting with you, there will be no more unidentified photos on your family tree.
13 April 2011
2:00 PM Eastern (U.S.)
1:00 PM Central
12:00 PM Mountain
11:00 AM Pacific
7:00 PM GMT
Register for this webinar now:
https://www1.gotomeeting.com/register/605430577