There's something about a bookstore

DearREADERS,
With the sad announcement that Borders is closing half of its 600+ brick and mortar stores, it seems Mr. Myrt and folks like him just won't be the same. He practically lives in the history and military sections of any given bookstore. We love to leaf though a book, reading the fly piece and checking out the index when making the decision to add a book to our collection. With US Civil War books, we're particularly careful in our approach.

Just this past week, we were browsing the history titles and discovered a gem -- The New York Times The Complete Civil War 1861-1865 including "all the coverage of every campaign and battle, 104,960

eyewitness accounts and articles in this volume and a companion DVD-ROM " edited by Harold Holzer and Craig l. Symonds, forward by President Bill Clinton. The New York Times  had reporters on the ground following troops, asking questions, and sending back reports. The reports that made it to print are included in this volume. Though the book came out last year, we somehow missed it -- probably due to our travels to courthouses doing genealogy research.

The study of history is essential as genealogy researchers strive to place each ancestor's life in historical context. The search capabilities of the DVD-ROM make this collection easy to navigate, but the chronology of the articles is not lost since the DVD-ROM is also browsable. Text from an article can be copied/pasted to notes about an ancestor who served in a battle you are researching. You may also wish to find the original article on one of the online newspaper websites to add as an image to that ancestor's profile. But I digress. 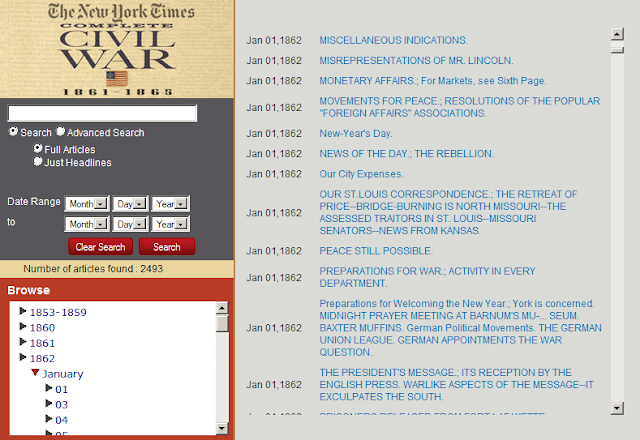 Amazon.com tries its best to provide a "look inside" this very same book, but the online experience isn't quite the same. With the Amazon interface, I can look at the book's cover (not the fly pieces), table of contents, first pages and the index, as shown below. "Surprise me" provides a random peek at a page. Using the "search inside this book" option for the word "Bentonville" took me to the chronological list of battles, and then to the index. 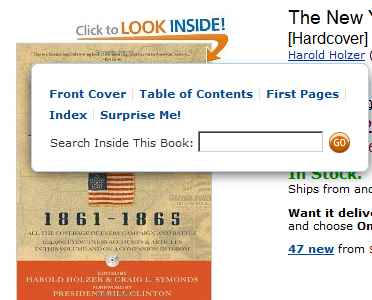 Interestingly, Amazon.com offers the The New York Times The Complete Civil War 1861-1865 for $23, not the $40 cover price minus our 10% Borders discount we paid at the mall near our home. (I order so much from Amazon.com, I have the "prime" shipping, which amounts to essentially free shipping after the first few purchases each year.)

Is the average book buyer willing to continue to pay high prices for the joy of holding a book in hand before making a purchase? In today's economy, I am beginning to doubt it.


TECHNOLOGY MARCHES ON
Newspapers were once our main stay source of information, but are experiencing declines in subscriptions. Magazines are moving to e-pub for display on iPhones and iPads and other electronic readers. Our 18th century ancestors sent letters to each other, picking them up from the post office the next time they went to town. Now days, we send millions of emails for instant communication. (As I compose, this I discovered via Facebook that a friend just survived a tornado, though her fence and gazebo did not. Her posting via cell phone was sent within minutes of the tragic event.)

When the wild and crazy inventors dreamed up radio and then television, our 20th century ancestors sat in living rooms across the country, glued to every word of a presidential address during the wars that plagued that century. Later, during the Persian Gulf War General Schwarzkopf had to remind reporters he wasn't going to give out certain information, as it would tip his hand to the enemy and put our guys in harm's way.

So where will this technology take Mr. Myrt in the future? He and I are not planning to forgo real books any time soon, though I might get him a Kindle for his birthday next month.