DearREADERS,
Last night in Second Life we met at the Family History Centre to talk about our favorite topic -- family history. For future meeting announcements, check out the Genealogists in Second Life group over on Facebook, where our friend Genie Weezles is cross-posting our "in-world" weekly genealogy newsletter.

Here are a few highlights, and some of the PowerPoint slides from last night's meeting. 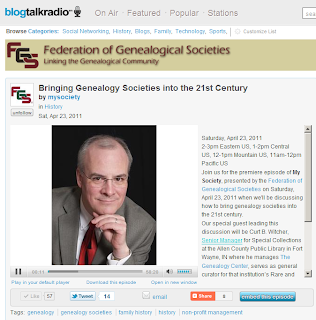 (ABOVE) Congratulations to the Federation of Genealogical Societies with it's brand-new "My Society" BlogTalk Radio Show. Saturday's offering, now in archive mode featured host Thomas MacEntee and guest Curt B. Witcher, former NGS and former FGS President. Their topic: "Bringing Societies into the 21st Century." Curt mentioned my favorite society suggestion -- making society publications available on the web. This "expands the reach" the hard work your society members are doing. Curt mentioned the revenue stream changed for one of his societies, as members become donors to support the work rather than just joining to receive a newsletter. 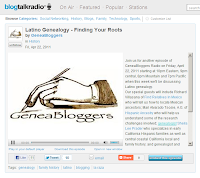 And speaking of BlogTalk [Internet] Radio, Thomas' GeneaBloggers Show on Friday featured Latino genealogy specialists. Listening to the archived version of the show is almost as good as listening live, where you would have had the chance to call-in with your questions. 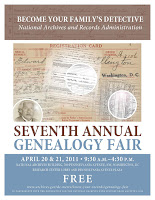 NARA - The National Archives & Records Administration held it's 7th Annual Genealogy Fair this past Wednesday and Thursday at Archives 1. Vendor displays were set up on the front patio on the 700 Pennsylvania Avenue side of the building under big event tents. Three classrooms were set up inside the building in Washington, DC (at the Navy Memorial Metro stop). NARA'S URL: http://www.archives.gov.
Ol' Myrt here attended day two, and spent much time talking with the social media reps and website designers. Yes, NARA has a Social Media Policy, and is reaching out to to the public through blogs, Flickr, Twitter and Facebook. (NARA's interface with genealogy bloggers is still in it's infancy, but then no one is perfect, eh?)
When I brought up the subject of Jean Wilcox Hibbin's recent series on NARA Regional Archives at Riverside, California record group access, things got pretty exciting. Seems NARA is looking for "Citizen Archivists" who report on their research experiences at NARA. It happened that the designer I was talking with is the one who updates the Pacific regional archives pages. Plans are to link directly to Jean's NARA blog postings from the Riverside NARA website. [Way to go, cuz Jean!] While I was there, a researcher came up to tell the story of her ancestor's Union Civil War Pension file. She was invited to send info via email, as she doesn't have a blog to link to. Seems demonstrating how to access records is a focus. (In my book, it is a lot more interesting to hear about the experience from another genealogists. The technical stuff can be provided by staffers, but I like the sizzle.)

(ABOVE) I've followed the NARA - Today's Document Mobile App on my iPad for a few weeks. It also works on Androids and iPhone. What a fun way to learn about different record groups at NARA.
BTW, Southern California Genealogical Society's Jamboree isn't about to be out-done. They just released their own app chock full of kewl things like speaker topics, bios, maps, etc. for ther upcoming annual June event to be held in Burbank, California. See: http://blog.dearmyrtle.com/2011/04/jamboree-app-wow.html

(ABOVE) So are you still holding out on doing a BLOG? Well, even The Archivist of the US, David Ferriero has a blog! See:http://blogs.archives.gov/aotus. His is one of several offered by NARA.
Ol' Myrt here took the class on the the 2 April 2012 release of the 1940 US federal census enumeration on the NARA website. Someone asked if at 12:01am we can check-in, and the answer was "We haven't set the time of the release on that date." Talking points included:
Among NARA's 1940 Census Research Strategies is the suggestion researchers study 1930 through 1940 city directories to determine the address of each ancestor, then use Stephen Morse's 1920, 1930 to 1940 Enumeration District Converter. (Yes, they recommended his converter from the podium.) Other handouts of note included NARA - 1940 Census Symbols and NARA - 1940 Census Questions. Myrt also suggests looking at:
While I missed  the Federal Land Records class given by Claire Bettag, CG (sm), you can bet Ol' Myrt here has a particular interest in the handouts located here. In fact, you may find all available 2011 handouts online at NARA GENEALOGY FAIR 20-21 April 2011 - Handouts.
Happy family tree climbing!
Myrt     :)
DearMYRTLE,
Your friend in genealogy.
Posted by DearMYRTLE on Monday, April 25, 2011