Carlisie PA military research has changed and may again 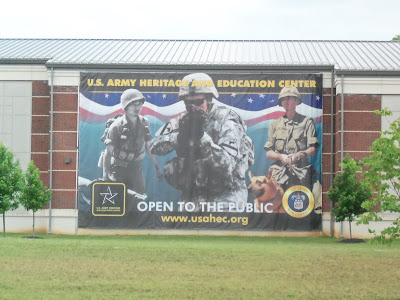 DearREADERS,
We arrived late Wednesday with enough time to get briefed on the new The U.S. Army Heritage and Education Center (USAHEC). Our approach to the building was guarded by the multi-story signage shown above. That middle soldier's infrared beam seemed to follow us as we moved, just like those spooky old portraits with moving eyes in old-timey horror flicks. Undaunted, we forged ahead to seek out information about the military experience of several of our US ancestors.

Thursday morning found us waiting as the doors opened to the library in Ridgeway Hall. One must actually use the new doors to the left (out of range of this photo.)

At that alternate entrance, we walked past the a large display room and the gift shop. Here's a peek at the indoor display, currently featuring the US Civil War. 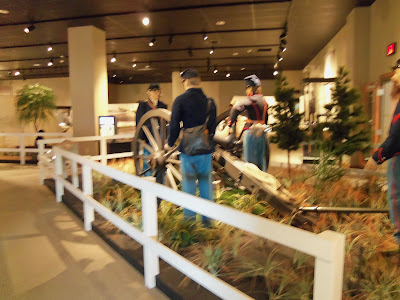 Preparation for research was accomplished through the website http://www.carlisle.army.mil where there is a link for the library's book, manuscript and photographic collection. We clicked around to find http://www.carlisle.army.mil/ahec/index.cfm.  We recognize from working through the catalog that this is only the first of many trips to Carlisle. Somewhere on the website Gordon remembers a comment that the online catalog is incomplete. Our plan is for Ol' Myrt to pull and digitize the manuscripts he expected to find. That will free Mr. Myrt up to work through the in-house bibliographic binders listing unit histories, etc..

Here are the details about the research facility and adjacent exhibits gallery:


"The Military History Institute (MHI) in Ridgway Hall [the library] will be open for research and touring on Saturdays from 9:00am-4:45pm. It will continue its normal weekday operations, Monday through Friday, 9:00am-4:45pm. MHI will continue to remain closed on Sundays. The new Visitor and Education Center building will open to the public for the first time on Saturday, May 14, 2011. The hours for this building will be 9:00am-5:00pm, Tuesday- Saturday, 11:00am-5:00pm, Sunday and closed Monday. The Visitor and Education Center includes a new exhibits gallery featuring the exhibit, “A Great Civil War, 1861: The Union Dissolved,” as well as multipurpose rooms and the USAHEC store." Source: http://www.ahco.army.mil/site/index.jsp


Unlike the open-stack style library at Carlisle Barracks I visited in the late 1990s, this AHEC library is state of the art and mostly closed stacks. We didn't need to go down rickety stairs to find the Iowa books and manuscripts, we merely ordered them and, in a few minutes, books and Hollinger box files were brought to our research table. Photographs are maintained in the same facility, so there was no need to navigate around all sorts of adjacent buildings as Barb, Audrey and I did back in the 1990s to visit the developing and emerging photographic collection.


Back to our research:
Most of Mr. Myrt's catalog queries were at the unit level. For instance he has a Union soldier who served in the 31st Iowa, so he searched for "31st Iowa". From this he has determined there are seven unit and individual soldier portraits in the photographic collection. Although some images are online, the ones for the 31st Iowa are not. Mr. Myrt also found reference to an enlisted man's letter of 7 May 1863, and a transcribed diary of someone in the same unit, but a different company, that will be his focus during this research trip.


One thing Mr. Myrt noted in his online preparations was that some of the hits he got were for resources not found at Carlisle, instead referring to records at Ft. McNair. In fact, following only a cursory review, it is easy for me to conclude that each site has many links leading to the other.

CARLISLE and McNAIR
Last week during our Advance Military Records II Course at Samford University's Institute of Genealogy and Historical Research there was some discussion about the distinctions between Carlisle and Ft. McNair as they are both Army history research facilities. Even now for us, those distinctions are vague.

According to Thursday morning's issue of The Sentinel daily newspaper, local residents are concerned about a proposed closing of this new (2001) AHEC (Army History Education Center) at Carlisle and moving everything to McNair. There is also something in the wind about a proposed museum at Ft. Belvoir, Virginia. See Robert W. Black's letter to the editor 23 June, 2011 and his comment that the move would strike a serious blow to the local economy. Elsewhere in The Sentinal there was an unsubstantiated report of library usage going from 3-4,000 annually at the old US Army Military History Institute library to something in the low 30,000 annually with this new facility.

Apparently Pennsylvania state funds have also been used to create this facility. See The Sentinal State Senate passes resolution in support of AHEC. See also Guest Editorial: AHEC should stay in Carlisle that explains the "Army, through the taxpayers, the people of Pennsylvania and friends from other states, has invested $48 million, which has given the Army and the nation a superbly functioning historical reference facility with a fully trained staff."

Mr. Myrt and I are well-accustomed to researching in a variety of city, county, state and national libraries, archives and historical facilities throughout the county. By far, the U.S. Army Heritage and Education Center (USAHEC) is arguably the most modern, well-equipped research facility we've visited. It would be a shame to close the doors on a $48 million dollar facility. We found the library staff ready and able to assist with peculiarities of our research work, providing prompt service in a cheerful manner. That is more than I can say for a few employees at NARA I or NARA II in Washington, DC, where we are sometimes made to feel as if we're imposing on the employees by asking our intermediate to advanced research questions.
To my mind, it would be unthinkable to lose this research center, conveniently located within a short drive of Gettysburg ~ one of the largest and most devastating battlegrounds of the Civil War.


I sure hope someone brilliant works this out so research at AHEC can continue.Gordon was considering donating the original photo of his uniformed ancestor who served overseas during the Philippines Insurrection. With things up in the air, I think he is wise to hold back on that donation.