Finding the date of last Thursday and six other challenges

Whilst Mr. Myrt is sleeping soundly, I've been updating my genealogy database, comparing it with what I've attached to folks on my Ancestry.com Tree. For some reason I decided to search GenealogyBank.com for my maternal grandfather, Lowell Froman. I found a hit for him in the Seattle Times obit of his mother Mrs. Louise Gielow. Boy, am I excited! I recognized her last married name and those of her grown children.
Here's the link to the scanned image of the full page, shown in this partial screen shot below. Note that GenealogyBank thankfully highlights text with light yellow boxes if it matches the search criteria. 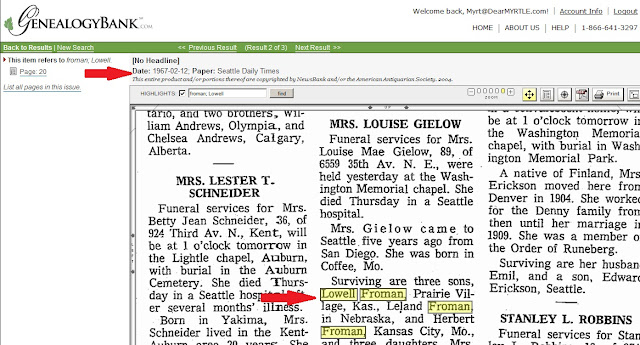 I am always curious to learn more about my great-grandfather, Lowell Simpson Froman, whom I met only once when I was about 4 or 5 years of age. He was divorced from my mother's mother years before. I knew he played the clarinet, and in fact I have one of his clarinets at our home in Utah.

You can imagine I was thrilled to find the obit on Lowell's equally elusive mother. She married a series of men after the death of her first husband William Gist Froman from whom our side of the family descends. In fact it was Louise who told my mother via telephone in the early 1950s that the "G" stands for "Gist" though all his records seem to refer to him as Wm G. or William G.


So, here are the steps I took to incorporate this digital image into my genealogy data files.

SAVED THE FILE from GenealogyBank in my Froman genealogy data folder on Dropbox. Oops! It could only save in .PDF format, and my RootsMagic won't take that. So I also zoomed in and cropped the obit itself, saving it as a .jpg file. Since I am using my laptop in a hotel room right now, I resorted to using Windows Paint, a freebie program that came with this machine.


VERIFIED THE NEWSPAPER TITLE AND DATE as transcribed is the same as that found on the scanned image. YUP! I like to copy/paste transcribed info to avoid my own typographical errors, with which my DearREADERS are entirely too familiar, but I digress. 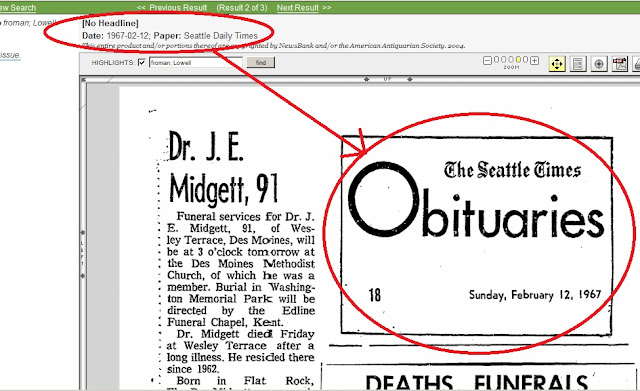 LABELED THE OBIT (shown in red below) with the name of the newspaper and publication date, again, using Microsoft Paint. Any photo editing software will do the trick for you. 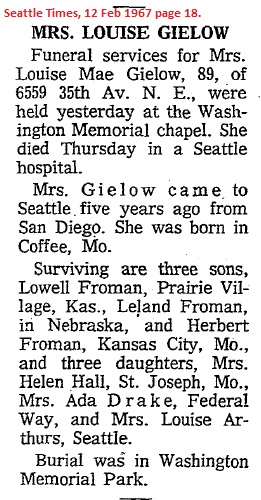 TRANSCRIBED THE OBITUARY in my RootsMagic notes for Louisa's death as follows:

Mrs. Gielow came to Seattle five years ago from San Diego. She was born in Coffee, Mo.

CALCULATED THE DEATH DATE
Just what IS the date of "Thursday" (we're assuming the immediately prior Thursday) if the obit was published 12 February 1967? Easy, smeasy! Just go to www.timeanddate.com/date/dateadd.html and type in the known date. Then click the little calendar icon to view Feb 1967 and make the determination. From this you can see that the 9th is the previous Thursday.

ENTERED THE DEATH DATE AND PLACE for Louise in my RootsMagic software. We had previously guessed the death was in the late 1960s or 1970s somewhere in California, but I learned from the obituary that Louise had moved from San Diego to Seattle some five years prior to her death in 1967.


ATTACHED THE OBIT IMAGE to the death information for Louise in RootsMagic, completing the note taking and citations.

THINKING AHEAD
At this point, the obituary is the only indication of a death date and place I have for Louise. This newspaper entry is a secondary source of information in that it is derived from another source, most likely the personal knowledge of someone reporting the information to the newspaper.

I'll want to obtain a copy of Louise's death certificate since it was an official record created for the government to report the event of her death and is considered more reliable. Fortunately, Ancestry.com has the Washington State Death Index online, so I looked and found the following entry:


SHOULD I HAVE WAITED FOR THE DEATH CERTIFICATE to arrive before typing the death information in my RootsMagic? The quick answer is no. Information about ancestors doesn't come to us in perfect form -- it comes in dribs and drabs, a bit at a time. So it is a matter of recording what I have at this point in time - the obit, not the death certificate.


Since it is 2:07am, I can hardly contact the Washington State Department of Health and have them fax over a copy of Louise's official death record.
But I do want to order it, as cause of death will be important in compiling my medical family history.

And there is nothing like getting it straight from the horses' mouth... or in this case, a notation to hopefully include the actual death date from the attending physician at that "Seattle hospital."


FOR THE OVERLY CURIOUS, here's a picture of my great-grandmother in her earlier years. It was sent in as proof of her relationship to Union Civil War soldier, William G. Froman who served in Company D, 3rd Provisional Enrolled Missouri Militia.


ANOTHER CHALLENGE
Can my DearREADERS mention at least six additional things Ol' Myrt should do with that obituary before I move on to the next project? Post your suggestions in comments to this blog entry. I'll keep checking back throughout the next few days to see what you come up with for me to do. Maybe you'll think of something I've missed entirely.