1812 PBS video, Preserve the Pensions and a QUILT!

I guess because I serve as President of Captain Ezra Jones Chapter of the War of 1812 Society, this article was extremely interesting to me. Therefore I wanted to share it with all members of lineage societies whose purposes are to promote patriotism and history.

Recently I was reminded that going to school in Virginia we were taught hardly a thing about this war, even tho we lived only 30 miles from Ft. McHenry. My daughter and her children, all history buffs, said they too were left out of the loop on this war and the purposes behind it.  Most of us know the Star Spangled Banner was written during the battle in Baltimore, and we learned the song Battle of New Orleans BUT how much more to we remember about Madison's War?

This article actually an ad in the September/October History Magazine, is what I want to share, from PBS Channel:

A small but bitter war that forged the destiny of a continent. THE WAR OF 1812, For two and a half years, Americans fought against the British, Canadian colonists, and native nations in a struggle that threatened the existence of Canada, and divided the United States so deeply that the nation almost broke apart.  With stunning reenactments, evocative animation and the incisive commentary of key experts, The War of 1812 presents a war worth remembering. Premiers Monday October 10,2011 at 9pm EST on PBS. [Check local listings for the time in your area. The 1 hour 53 minute video is available now online at the PBS site here.]

During the years 2011 and 2012 there will be many celebrations and exhibits on this the 200th anniversary, lets keep our eyes and ears open for these events.


DearBARB,
Thank-you for your email. The War if 1812 is indeed "the forgotten war." Ol' Myrt here has a few more commemorative  activities to add to your list.

1812 Preserve the Pensions
There is a join effort between Federation of Genealogical Societies and the National Archives (US) to scan all surviving War of 1812 Pension files and make them available for free. Ancestry.com is doing the scanning at cost. A $25 donation will digitize 50 images -- a $500 donation will digitize 1,000 images! Find out more at http://fgs.org/1812.

Here is the link to the pension files that have been scanned thus far and housed housed over at  Footnote now called fold3.com: War of 1812 Pension Files. From this site we read


"The documents in this collection include full pension application files for soldiers and sailors who served in the War of 1812, as well as for their widows and children, or other heirs. The first applications were filed by servicemen who were disabled as a result of their service, or by widows who lost a husband in the war. The descriptive pamphlet for the Index to War of 1812 Pension Application Files, M313, published by NARA, provides a great deal of background and explanatory information about the pension files and the acts that provided for them." Browse the 1812 Pension Application Files  here. 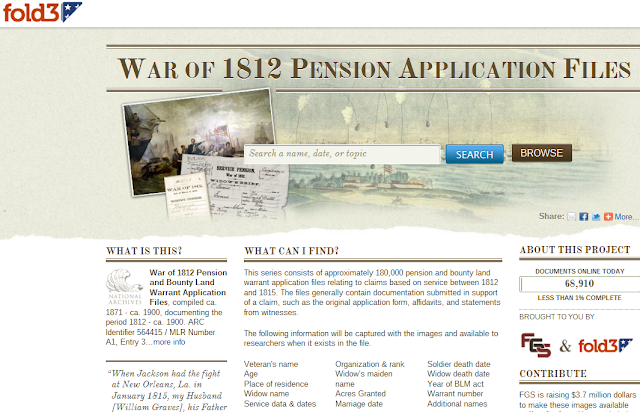 Genea-Quilters' 1812 Preserve the Pensions Quilt Project
For centuries, women and men have hand-stitched scraps of fabric into quilts to comfort family members and guard against the cold of night. Oft times quilts have outlived their makers, many of whose names have long since been forgotten. Yet the legacy of loving hearts and skillful hands have lived on.

To honor those who valiantly served during the War of 1812, over 20 members of Genea-Quilters are busily creating a large commemorative quilt. The Genea-Quilters 1812 Preserve the Pensions Quilt Project will debut at RootsTech 2012, will also be on display at NGS 2012 and at FGS 2012. Funds raised by your thoughtful donations in this fund raising opportunity will support the Federation's 1812 Preserve the Pensions digitization effort.

Posted by DearMYRTLE on Monday, September 05, 2011