DearREADERS,
Got UK railroad workers on your family tree? Then be sure to check out UK Railway Employment Records, 1833–1963 available to Ancestry.com World Deluxe members.

Ancestry.ca explains "The UK’s railway workers were among the most important pioneers of the 19th century. They drove the tools and ideas of the Industrial Revolution all over the UK, forever shaping the way we live, and do business in Canada and around the world. Over one third of Canadians have British roots—explore yours further and you may discover ancestors from across the pond that were part of the driving force behind a revolution. In this historical collection, you will find the positions and salaries of these important figures. You may also uncover various details such as apprentice records (which could include father’s name), accident reports and even transfer records, so you can follow ancestors as they move around the country. Search by name, birth year, event year, station, or company and you may discover your UK ancestors in these Railway Employment Records."

Being ever the intrepid reporter, Ol' Myrt decided to check out this collection, as I am unfamiliar with this record group.

When looking for a great uncle from a friend's family tree, I was unimpressed when I typed in just his name saw that the hit list for "James Smith" isn't too informative (see below). One is forced to look at each entry. What I discovered is a likely glitch in the "hit list" options. All one sees is the name -- with date, location and company hidden from view. This certainly would not entice someone to sign up for Ancestry's World Deluxe membership now would it? 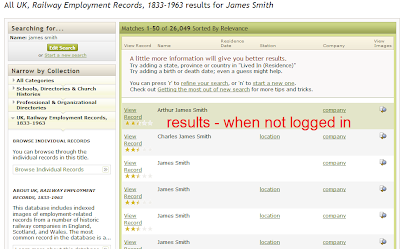 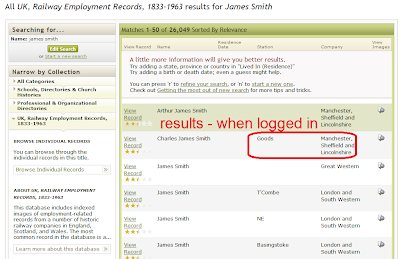 No, dates are clearly shown on the original page indexed for this individual. When clicking to view "Charles James Smith's" record (shown partially below) in the UK Railway Employment Records, 1833–1963, Manchester, Sheffield and Linconshire 1900-1912 Accountant's Office, page stamped 537 (below) we see that his ledger begins in 1902 (See "A" below), with a notation that he had been appointed Oct 1, 1901 at age 21 3/12 to a different company from which he was transferring, and that on 1 Jun '21 he was transferred "to control of the chief gov't manager." Certainly any one of those dates would be useful to distinguish this "Smith" from others by the same name, so why doesn't date or date range doesn't show up on the hit list? 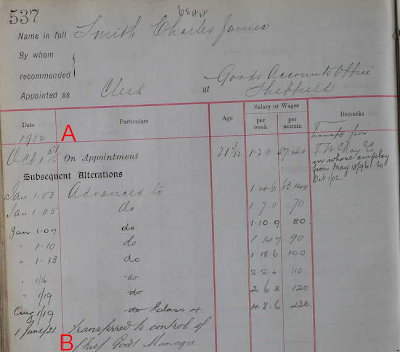 Now I do know a few of the programmers at Ancestry.com, and so I try to have faith and figure out what the line of thinking was when presenting this indexed image collection. So I clicked the "Advanced" search button (at point "A" below) and found I could modify my request to include more than the birth, lived-in, any event date/location and keyword. Advanced options permit specifying the name of the ancestor's employer, the railway company, if that info had sifted down to my friend's knowledge. (Unfortunately it hadn't).

All my friend knew from family tradition was that her James was born about 1845, and began working as a young boy at "brick arms" or a "brick yard" for the railroad. She never did find a town by either of those names, but this is actually quite a bit of information if you ask me.

So my NEXT search for James Smith included a date 1845 for birth, not specifying a location because of the confusion and I believe I've found him! Do you think the station "Bricklayers Arms" could be the "brick arms" or "brick yard" from my friend's family tradition? More research needs to be done.

Here's the link to the image on Ancestry.com. At the TOP of the page (zoomed in screen capture below), we see the station named on a very different form from my first example. Instead of a page for each employee, this double page lists entries for many employees.

On the 21st line, we find James Smith, who is apparently not transferred from a different folio, but is listed as dismd (probably dismissed?) as are a number of other employees listed on the page. According to the ledger entry, a James Smith began working for the railroad in Jun 1860. 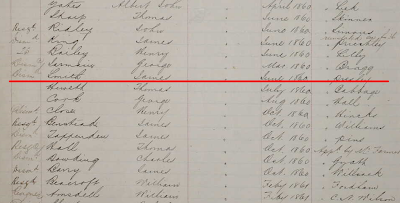 This James Smith was 15 in 1861, worked for 7 shillings weekly, and was dismissed for disobedience, again as are many other workers listed on the page.

So, Ol' Myrt here recommends searching this record collection by your ancestor's name and birth year -- even if you have to make an educated guess.

From Ancestry.com's description of the collection we read:
All of the railways included in this database were once private companies that later came under authority of the British Transport Commission with the 1947 Transport Act. The collection features selected records from the following companies:
Approximately 50% of the books cover the Great Western Railway, while the books covering the London and North Western Railway are more dense with records. Most records are prior to 1949, though some date later."

Posted by DearMYRTLE on Wednesday, September 07, 2011