DearREADERS,
FINALLY there are plans to do something about the citation problems we experience with genealogy websites and genealogy software. You may have picked up on a press release sent out this week titled SourceTemplates.org a new Open Source Community. The SourceTemplates.org press release includes this comment from the BetterGEDCOM group where I serve as moderator:

"BetterGEDCOM is an independent group of end users and software developers working toward the next generation of open standards for communicating genealogy information electronically.  We also welcome SourceTemplates.org to the effort to develop a widely supported international model for source citations.”

It took two BetterGEDCOM developer meeting sessions to style this statement, indicating our interest in participating in the joint effort at SourceTemplates.org.

WHAT IS OPEN SOURCE?
WikiPedia states "Open-source software is software whose source code is published and made available to the public, enabling anyone to copy, modify and redistribute the source code without paying royalties or fees. Open source code evolves through community cooperation. These communities are composed of individual programmers as well as very large companies." Familiar examples of open-source software cited in the WikiPedia article include Mozilla Firefox (web browser), Mozilla Thunderbird (e-mail client) and Linux (family of Unix-like operating systems).

WHY GENEALOGISTS NEED SourceTemplates.org
You'll most likely find that the source citations are what get scrambled during the transfer process when sharing genealogy data with a cousin using a different genealogy program. For examples of this unfortunate phenonemon, see postings from the past 10 months at the BetterGEDCOM Project Blog.

Randy Seaver responded to the SourceTemplates press release by saying "Currently, if a user creates a source citation using a source template in one of the software programs, and tries to use GEDCOM to import their genealogy data file into another program, or to an online tree, the source citations sometimes get mangled. Free-form source citations (which use a limited number of fields) do better than source citations created by the Evidence! Explained source templates because each program uses a different set of GEDCOM tags."

WHY GENEALOGY WEBSITE AND SOFTWARE PROGRAMMERS NEED SourceTemplates.org
Just as modern genealogy software can access a remote database when calculating GPS locations where our ancestors lived, so will SourceTemplates.org serve as a central site for genealogy programs to make improved source citations. The programmers won't have to spend time creating citation samples for each database they produce, but can choose them from SourceTemplates.org. 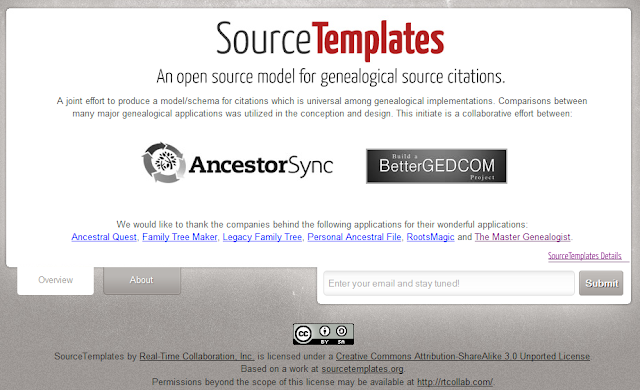 Initially working with the known set of Elizabeth Shown Mills' citations and the largely US-based genealogy software will serve to train a core group of advisory and administrative associates at SourceTemplates.org. Eventually less familiar OCLC, NARA, TNG and other sites' bibliographic info will be incorporated into SourceTemplates.org. The work will then begin to encompass a diverse set of associates from countries throughout the world.

Diversity among language and cultures is an essential component of SourceTemplates.org. One thing I've learned -- just because we cite things one way in the US, doesn't mean that fits the acceptable criteria for citations in another country. Developing a standard that shares elements from all disciplines will bring our genealogy community together. This is important to me as a researcher, because in climbing my family tree, I quickly move from US to German, Welsh, Irish, Scottish and Danish ancestry. And I am quickly learning about Norwegian and Swedish genealogy record groups that mention Mr. Myrt's ancestors.
HOW WILL SourceTemplates.org WORK?

End-users like Ol' Myrt here will be able to use my genealogy program of choice with SourceTemplates.org enabled. Like a plug-in, I'd be in my genealogy program, but be able to pull up a citation sample that matches my document. I'd probably only have to add the page number for a census record, for instance. Alternately (though probably rarely) I'll be able to create a custom citation at an advanced version of the SourceTemplates.org website.


THE BIG QUESTION IS...
WHEN will this initiative have something concrete to offer the genealogy community? I don't know. I do know that the login protocols and admin level definitions are being designed as we speak, as I have been party to that design collaboration.

You can expect more from Ol' Myrt on this topic as the iniative rolls out.