From: Chris Whitten
DearMYRTLE,
Regarding yesterday's DearMYRTLE BetterGEDCOM Statement, do you have any opinions on opengen.org that you'd be willing to share?


DearCHRIS,
A quick visit to the OpenGen.org website this morning indicates the site was last updated in Feb 2011, and that the last planned meeting was March 2011. BetterGEDCOM and OpenGen had similar listings of "members" which is quite different from active participants. 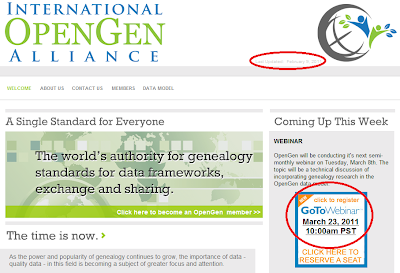 OpenGen was a "BetterGEDCOM-like" group with similar intentions, except that it was managed by a web developer, Scott Mueller of AppleTree. It made sense that Scott should attempt to involve the community to develop a standard GEDCOM alternative, since accepting GEDCOM files can be problematic for his website.


Unfortunately OpenGen promised periodic meetings but there was little attendance. The OpenGen.org group used BaseCamp for their development, so the project wasn't transparent enough to suit my tastes, i.e. it couldn't be independently reviewed without joining the project.

If was from OpenGen's problems that I realized a GEDCOM alternative had to be arrived at from a so-called "non-partisan" point of view to be accepted by all vendors.


In addition to the volume of discussions on the BetterGEDCOM wiki and a few quality postings on our blog, BetterGEDCOM participants including folks from the US, Germany, the Netherlands and occasionally Finland, met regularly once or twice most weeks during this past year. Unfortunately, BetterGEDCOM just couldn't come to a consensus of opinion and put a product out there that could be readily assimilated by software and web developers.

If FamilySearch returns with a GEDCOM-X alternative, they will have skeptics who are concerned that the product won't be supported, as the current GEDCOM has suffered through 15 years of no updates by FamilySearch's parent organization. To their credit, FamilySearch now has an extensive Developers Network, and due to the sheer size it's influence in the international genealogical community, FamilySearch may push forth with a GEDCOM-like alternative.


What concerns me is that I don't want a genealogy website brokering file sharing with my cousin. I just don't know what info will be aggregated or incorrectly interpreted by that website, particularly if my cousin creates custom fields not matching the "skin" of data fields the website permits.

A new vendor on the scene, AncestorSync, has come up with a viable data transfer utility that will be a breakthrough in the industry once it is released. The test runs I've viewed are incredible. But the service won't be setting data standards -- and it may no longer be necessary.


Don't get me wrong -- I still believe in genealogy data standards on the front side (read that "user input"). That is a matter of educating researchers to comply with recommendations in the Genealogical Proof Standard AND getting those researchers to use the data fields for the purpose intended by the developers of their software programs of choice.

If a service like AncestorSync can transfer data between programs by understanding definitions of tags as defined by each genealogy software program, AND do that transferring to multiple formats simultaneously, then, heck, Ol' Myrt here doesn't mind paying that service $19 per year for the technology.


So Chris, I sure do hope this answers your questions.