DearREADERS,
You asked for it so here are details about tonight's GeneaBloggers internet radio show. Ol' Myrt here will be hosting while Thomas is on assignment speaking in Indianapolis to speak at the Indiana Historic Society.

Our theme tonight is:

Give Me Your Tired, Your Poor:
19th Century US Immigration
Friday, February 17, 2012 9pm-10:30pm Eastern US 8-9:30pm Central US 7-8:30pm Mountain US 6-7:30pm Pacific US
Tune in here:
http://www.blogtalkradio.com/geneabloggers/2012/02/18/give-me-your-tired-your-poor-19th-century-us-immigration
You don't need a radio, just your computer, speakers and a connection to the internet. You can also download the recorded version after the show at iTunes.
Listeners who wish to pose questions of my guests may do so either by typing a comment in the chat screen that is activated during the live broadcast or by in using this number. Note the country code, if necessary): 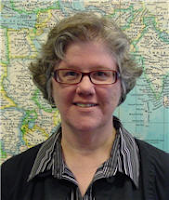 Marian Smith, Chief of the Historical Research Branch within US Citizenship and Immigration Services, or USCIS, in Washington, DC.  She is an Historian who first joined that organization in 1988 when it was the INS.  For many years she was a regular speaker at national genealogy conferences and the author of genealogical journal articles about immigration and naturalization history and records.  She now directs the agency’s History, Library, and fee-for-service Genealogy programs.

Audrey Collins, author of  The Family Recorder genealogy blog and Family Historian at The National Archives (UK). Despite having no English ancestry of her own (she is a Scot with Irish roots), Audrey has been researching English genealogy for over 20 years.

Audrey's unique perspective will center on the "push" and "pull" factors that induced emigration from the UK and Ireland to the US & Canada in the 19th century.

Angela Y. Walton-Raji’s work in genealogy has made her widely accepted in the field. She was born in western Arkansas, and grew up on the Arkansas / Oklahoma border, in the city of Ft. Smith, Arkansas. She attended St. Louis University, where she obtained a degree in Romance Languages, and later earned a Master's Degree in Education from Antioch University. Being an avid genealogist, Ms. Walton has researched her family history since 1975. In 1991, she located her family records among those of the Choctaw Nation, confirming a relationship often spoken about from family oral history. With this discovery, came the sudden knowledge that her great grandparents were African slaves of Choctaw Indians, and that her Walton ancestors were among several thousand Africans who were enslaved by Native Americans, including those who migrated west on the Trail of Tears.
Among the links we'll discuss are:
BLOG SPOTLIGHTThe Legal Genealogist Blog
Judy Russell, a genealogist with a bachelor’s degree in political science and journalism from George Washington University and a law degree from Rutgers School of Law-Newark. She attended the National Institute on Genealogical Research at the National Archives in Washington, D.C.  At the Institute of Genealogy  and Historical Research (IGHR) at Samford University, Judy has successfully completed Elizabeth Shown Mills’ course in Advanced Methodology and Evidence Analysis and Thomas W. Jones’ course in Writing and Publishing for Genealogists. Her work has been published in both the National Genealogical Society Quarterly and the National Genealogical Society Magazine.
But it is for Judy's work as a blogger that we honor her tonight.  The Legal Genealogist Blog has actively supported the RPAC's "Stop ID Theft NOW!" initiative with several recent posts:
So, DearREADERS, if you haven't tuned in to GeneaBloggers internet radio show before, I think you'll agree tonight would be a great time to start.
Happy family tree climbing!
Myrt     :)
DearMYRTLE,
Your friend in genealogy.