DearREADERS,
If you are into Google +, you'll want to join the hangout tonight to discuss the forthcoming 1940 census images and indexing project. Here's the info from our friends at the1940Census.com. Ol' Myrt will certainly be there!

Only five days until the release of the 1940 U.S. Census! To get ready, FamilySearch is hosting one last Google+ hangout before the official release. Join us Thursday, March 29, at 8 p.m. Central US time on the FamilySearch Google+ page to hear from a panel of experts there to answer your questions about the 1940 Census and the 1940 U.S. Census Community Project.


To participate, watch a live broadcast of the panel on the FamilySearch Google+ page.  You can submit questions live in the comments section of the hangout broadcast as well as participate via Tweetchat using #1940USCensus hashtag.   Questions submitted in advance on Facebook or by commenting on this post, sending us an e-mail, or sending us a direct message on Twitter will also be addressed.  The broadcast will be made available to watch after the event on the FamilySearch YouTube Channel. 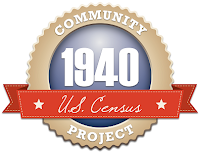 Source: No Time to Waste: Join Us on Google+


FOLKS HAVE ASKED
Yes, this is similar to the DearMYRTLE 1940 Census Images & Indexing Update webinars scheduled for 6pm Pacific every night Mon-Fri next week. One difference is we will share what we know AFTER the images are released. Another, is that the attendee interface for the webinars next week will be using GoToWebinar instead of tonight's Google+ hangout interface. Both are designed to bring the most info to the greatest number of people possible, so that we can find our ancestors in the 1940 census!

If you need a time zone converter, there is a great one located here:
http://www.timeanddate.com/worldclock/converter.html