iPads: Do genealogy presenters need them?

DearREADERS,
Ol' Myrt here is getting serious about using her iPad as a substitute for her laptop when giving presentations at genealogy conferences, but two problems have emerged:
Ol' Myrt here was surprised by the interest when I made a few comments about this on Facebook. This blog post is based on those conversations and my desire to get this working seamlessly.

EQUIPMENT ON HAND
We got the Epson EX7210 projector for the price (Office Depot $599 price is better than than Amazon.com right now), number of lumens (2,800) not as small as some, but much lighter (5.1lbs) than most. It also has the 16:10 wide screen orientation consistent with most modern computers and tablets. My old Epson projector still works, but I am just waiting for that bulb to doe. Also we just didn't want to use an HDMI to VGA adapter. (Why go fuzzy if ya don't have to?) This view from Amazon.com shows the hookups on the back of the projector. 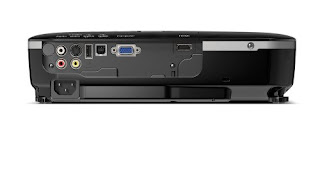 We went to the Apple store to get the recommended HDMI to HDMI cable for $19 and a Digital AV Adapter for $39 that accepts one end of the HDMI cable and also the power cord for the iPad. At the Best Buy on 21st South in Salt Lake City, they have a dedicated Apple department, but they aren't well stocked.

Genealogist and new mother of twins Anne Roach chimed in "So, I have steered clear of the iPad thus far because it wasn't practical for computer programming and speed typing, but now that I am a pseudo-amputee (at least one hand belongs to a baby at all times) I may be changing my tune. Chicken pecking on an iPad now seems quite efficient. Thanks for the projector info!"

Cathi Becker Wiest Desmarais explained "Anne, you can also use a Bluetooth keyboard. I do that if I have a lot of typing to do. I can also touch-type on the on screen keyboard if I use it in landscape position, but after a couple of paragraphs my hands get tired. It's fine for emails, but I use the wireless keyboard for anything longer."

"I have written most of the text for my master's project on the iPad and use the keyboard from the 1st iPad (the one with the connector that charges). It sure saves my hands on the longer docs!" says Luana Wentz Darby.

Mr. Myrt and I used keyboards to take notes at Samford IGHR last summer. I use one that docks the iPad in the vertical position, while his is a wireless model. Both are from Apple. We have since seen an aftermarket keyboard and cover in one that I think is much better. Office Depot sells one called a Vivitar® iPad® 2 Portfolio With Keyboard, Black for $79.

Ol' Myrt here tends to type on the screen 99% of the time, including most mornings when I laze around listening to the Today show while browsing through Facebook and the overnight emails. Oh yes, I love the portability of the iPad. Love that it doesn't get hot like our laptops. But flash really doesn't work on iPads, even using Skyfire. With Ancestry going that way with its image viewer, I don't know what this will do to my Ancestry app and my Ancestry Member Tree.

TRYING TO SOLVE PROBLEM #1
My iPad1 isn't showing anything more than a Keynote presentation through the HDMI connection to the Epson Computer projector. Mr. Myrt's iPad2 works just fine.

It was easy to got the physical HDMI connection to work between the iPad and the projector, and to tell the projector to look for the "source" through the HDMI port. But we can only view Keynote slides, not any other iPad screens. What's up with that? I am accustomed to hooking a Windows computer to a projector and seeing everything the presenter does through the computer projector.

Facebook friend and former UGA President, Luana Wentz Darby said "Hmmmm...my HDMI connector worked great at RootsTech 2012 with my iPad2. I was able to access everything on my iPad and the audience saw what I saw. I don't think the original iPad works as well with the HDMI connector."

Carolyn L Barkley explained "I've used my iPad2 for lectures. I wasn't using HDMI, but rather straight VGA through a projector, but had no problems with any images."

Ol' Myrt here plans to try connecting the iPad1 to the projector using following Carolyn's advice, testing out the VGA and the USB connections. The guys at the Apple store only know how to do all this wirelessly with the Apple TV device. That won't work in places like inside NARA1 at an APG meeting where my Verizon Mi-Fi only gets 1 bar, and it's outside the range of NARA's public network.

Bottom line: I may need to use Mr. Myrt's iPad2 to present.

TACKLING PROBLEM #2
Getting a PowerPoint (Windows) presentation into the iPad's Keynote is problematic.


The PowerPoint can be saved as a .PDF so that each slide is merely an image. This isn't a viable alternative since many slides have animations. (I frequently use red boxes or arrows that point to various parts of a document, or show zoomed-in portions of a document we're dissecting in a presentation.)

How do I get the .key (Keynote) file into my iPad? My friend and sometimes co-presenter Russ Worthington has a Mac with Keynote, so he successfully imported a PowerPoint presentation, complete with all the animations., uploading it to our shared Dropbox folder. However, my iPad's Dropbox app keeps crashing when I attempt to pull in the file to my iPad. Note the Keynote presentation file is too large for email.


Have my DearREADERS got any suggestions? Maybe I'll have to use iTunes somehow to get the from my computer to my iPad? I have an iCloud account, but don't know what the heck to do with it. I wonder if I should save the .key file to an SD card? I do have a SD to iPad connector.

Has anyone gone down this road before, or shall I just keep studying up and share what I learn when I get this figured out? The usually helpful guys at the Apple store had no suggestions.