WHERE to Look Next - Part 1

DearREADERS,
On March 13th, Ol' Myrt here will provide a virtual presentation titled "Where to Look Next?" from her home in Utah to the gathering of the Citrus County Genealogical Society of Inverness, Florida. The meeting will be held at the LDS Church, 3474 W. Southern St., Lecanto, Florida beginning at 10am.

When family historians hit the proverbial brick wall, it’s time to regroup and look again at a broad variety of record groups. Learn more about the locality where each ancestor lived, gathering clues about ecclesiastical and government jurisdictions, migration patterns, legal policies, and social customs, in addition to information about surviving records groups in local and regional repositories in manuscript, microform or digital format.


Much of genealogical research isn’t about people, it’s about the places they once lived.

Perhaps you’ve ventured out on the web to reputable websites like Ancestry.com, FamilySearch.org, FindMyPast.com (England, Wales), ScotlandsPeople.gov.uk and such. No single place on the web has it all.

IT’S NOT ALL ON THE ‘NET
All too often beginning researchers think climbing one’s family tree is just a few mouse clicks away. Recent TV advertising for a major genealogy website mislead researchers by stating “You don’t have to know what you are looking for, you just have to start looking…”.

PRACTICAL ADVICE
The key to renewed research success is to seek advice of experienced researchers. The FamilySearch Research Wiki http://wiki.FamilySearch.org is a great place to start.  Many articles are compiled by employees of the Family History Library (FHL) and include references to essential resources outside the FHL collection. Additional articles are submitted by those who have research experience in a locality or ethnic group. BELOW: A screen shot of the Massachusetts page from the FamilySearch Research Wiki. Note the variety of topics: 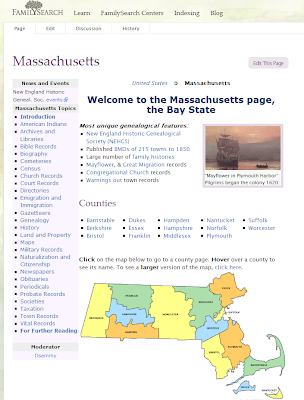 And there are links for counties and towns for specific details.

BELOW: A review of the section titled “Massachusetts – Military Records” on the wiki shows the following information about Colonial Wars. If you aren’t in Salt Lake City with access to the Family History Library books, the wiki informs you of titles that might solve your research challenges.

Numerous records of colonial wars have been published. The Family History Library has copies of most of them, including: