DearREADERS,
Ol' Myrt here recently mentioned that she is turning to Facebook and Twitter for a great deal of postings that may be of interest to my DearREADERS. This is a decidedly different approach, say, unlike the awesome work of Dick Eastman. When he spotlights the work of others, with individual posts to his blog feed. But this means he has to go through extra work to get those posts - opening up his blogging software, copying and pasting the a paragraph to quote, and providing a link to read the full article for more information. 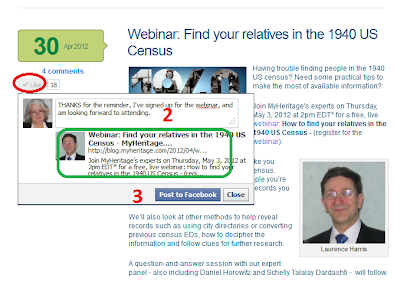 ZITE IS AN APP from the New York Times for mobile devices installed on my iPad. Zite aggregates news articles in a variety of categories and also provides the option to share via Facebook and or Twitter.

Here links to some of the worthwhile posts I've discovered in my travels throughout the Internet. During the last two weeks, I "sent them" to my Facebook friends and Twitter peeps using these two methods. Maybe seeing a list of what didn't "make it" to my blog will inform your decision to friend Ol' Myrt on Facebook or follow Myrt on Twitter? Or maybe you can convince me I should do a periodic "catch up" post like this, to send the info to my blog readers?

Myrt commented: Randy Seaver describes his genealogy work flow. [This is a MUST READ!]

Genea-Musings: Dear Randy - Can You Describe Your Genealogy Workflow?

Besides sharing my research with known family members and fellow genealogists, this blog also serves as cousin bait.When someone out there starts the journey to searching for their roots, they usually begin by googling the names of their ancestors.  And I'm so happy when we have a common…
Myrt commented: Great post, Jennifer!

christchurchphila.org via Zite iPad App Known as "The Nation's Church" because of the famous Revolutionary-era leaders who worshiped here, Christ Church was founded in 1695. It was the first parish of the Church of England (Anglican) in Pennsylvania. It is also the birthplace of the American Episcopal Church.  Talks on the church's rich history...

blog.mysciencework.com via Zite iPad App Whether you’re a student, researcher or engineer, you’ve probably mastered to perfection certain IT tools: PowerPoint, word processing software, electronic messaging. Other, less well known tools exist, each with a specific use.  In research, as in many fields, it is important to organize one’s time…

Myrt commented: An app that controls iPads in the same network during the presentation.  Best Tools for an iPad Presentation inc.com via Zite iPad AppNeed to nail a presentation? Here are a few tools you should know about.

Myrt commented: Forcing folks to do only all things Apple?
Apple Is Rejecting Apps That Use Dropbox Functionality

french-genealogy.typepad.com via Zite iPad App. Pondichéry is upon us again! In truth, this happy find of a book covers nearly all of French India. The Last Post : Inscriptions on French Graves in India is a labour of love by K.J.S. Chatrath...

Myrt commented: Cool tools. Boomerang Calendar turns your Google Calendar into what is should have been thenextweb.com via Zite iPad App. A few weeks ago when I was at SXSW, I met up with Baydin Software CEO Alex Moore. We talked about upcoming features to the company's amazing Boomerang software, but then Alex showed ...

Myrt commented: Weird possibility. I hate big business and big brother ruling our lives. Just saying... Telia holds Skype hostage, may block VoIP in Sweden
gigaom.com via Zite iPad App. Skype may be blocked for use by a wireless provider in the very country one of Skype's founders, Niklas Zennström, is from. Sweden's Telia is reportedly considering a block on Skype's mobile video and VoIP services later this year unless customers pay an additional usage charge.