NOTE from DearMYRTLE: The following was just received from our friends at NEHGS. Please address all inquiries to amagno@nehgs.org. 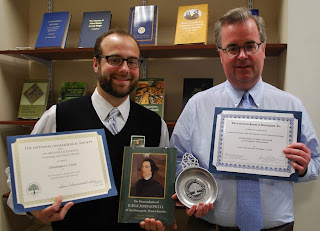 Boston, MA – May 22, 2012 – The New England Historic Genealogical Society (NEHGS) announced today that one of its latest Newbury Street Press titles, The Descendants of Judge John Lowell of Newburyport, Massachusetts, by Scott C. Steward and Christopher C. Child, has won top honors from both the National Genealogical Society and the Connecticut Society of Genealogists. The awards were handed out at recent ceremonies hosted by each organization.

The National Genealogical Society (NGS) awarded Christopher C. Child the 2012 “Award for Excellence: Genealogy and Family History Book” on May 11, during the NGS annual conference held this year in Cincinnati, Ohio. The Connecticut Society of Genealogists (CSG) honored both authors with the 2012 “Literary Award, Grand Prize for Genealogy” at its annual luncheon on May 19 in Berlin, Connecticut.

NEHGS Director of Publications and book co-author Scott C. Steward said, “We had hoped to make the Lowell book a model, both as a genealogy and as an example of book production at Newbury Street Press, so having our work recognized by NGS and CSG is doubly rewarding.”

The book marks the first full treatment of the Lowell family since an 1899 genealogy written by Delmar R. Lowell. This new book traces descendants of Judge John Lowell (1743-1802) to the present day, and includes famous descendants Francis Cabot Lowell, for whom the city of Lowell, Massachusetts is named; John Lowell, Jr., founder of the Lowell Institute in Boston; James Russell Lowell, the poet and diplomat; astronomer Percival Lowell; Harvard president Abbott Lawrence Lowell; the poets Amy Lowell and Robert Traill Spence Lowell; architect Guy Lowell; and Isabella Stewart Gardner, art patron and museum founder. The book comprises more than one thousand entries for heads of families. Because of several early cousin marriages, many Lowell descendants have two or even three lines of descent from Judge John Lowell.

This marks the first time that NEHGS has won both a national and a regional award for one of its books. NEHGS publishes a number of titles each year, including genealogies, biographies, and instructional and resource books. NEHGS publishes its genealogies under the Newbury Street Press imprint. Learn more at www.AmericanAncestors.org
Posted by DearMYRTLE on Tuesday, May 22, 2012