EXAMPLE: Get the MOST original version of a marriage record

DearREADERS,
Yesterday, Ol' Myrt here blogged about finding the marriage certificate of her father and stepmother among her father's compiled genealogy papers. I carefully transcribed the document in my post titled Missing marriage record.

Since then, one DearREADER, Alice Allen, pointed me to the Washington State Digital Archives collection located at www.digitalarchives.wa.gov. After downloading the viewer, I found the "marriage return" for the event. There are some major differences between the "Return" and the "Certificate". I feel this is the "Return" because the bottom of the form states: 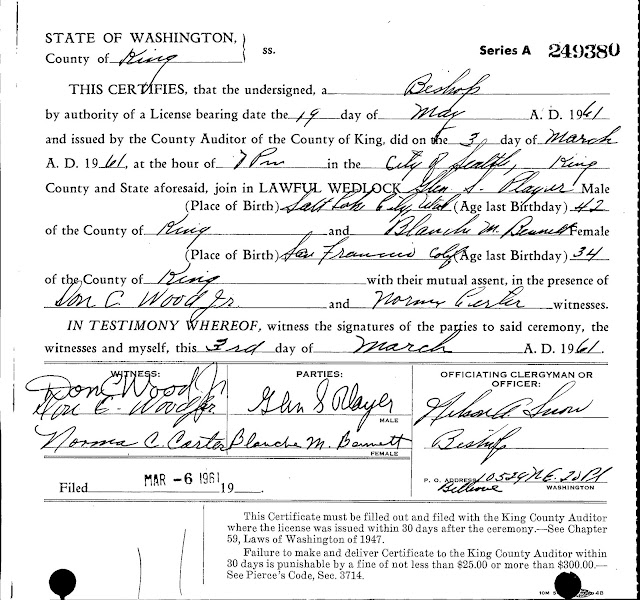 SIMILARITIES AND DIFFERENCES
1. "Certificate to be given to the contracting parties" does not include the birthplace or age at last birthday of the male and female, as we find in the "Marriage Return".

2. "Certificate to be given to the contracting parties" does not include the stamped date of filing at the County Auditor's Office.

4. The names of the couple, the witnesses and the Bishop who officiated at the ceremony are the same in both documents as is the 7pm time of the ceremony.

5. The "Certificate" lists only the county and state, but the "Return" includes the city where the ceremony took place, in this case Seattle.

6. The handwriting of the Bishop's address which appeared as either a messy "20" or "28" as I transcribed from the "Certificate" appears more clearly as "20" on the "Return".

TRUE DATE OF MARRIAGE?
Confusion arose when the date of marriage was listed as 31 March 1961 on the "Certificate" and  3 March 1961 on the "Return". However, since the King County Auditor stamped the "Return" with the date of filing  "March 6, 1961" we have a valid argument for their marriage having taken place on the 3rd, with the "31st" merely being the error on the part of the officiator when completing the "Certificate".

TRUE DATE OF LICENSE TO MARRY?
I am still confused how one could get married on the 3rd of March 1961 by authority of a license issued 19th of May 1961 as listed on the "Return". I am equally baffled as to the license date of 19 May 1957 listed on the "Certificate". I don't know the exact law in place at the time, but I'm confident a license issued in 1957 wouldn't be valid for a marriage ceremony in 1961. One would have to look at the marriage application for "License" for this couple, not the "Certificate" or "Return" to verify the true date of the license.

All these things point to why we must obtain the "most original" version of a marriage record.