Why the Georgia Archives Closure is important to YOU 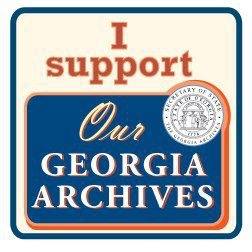 DearREADERS,
If a state archives holds the official record of the proceedings of the state legislature, closing an archives puts an end to "open government", rendering it impossible to study the laws and directives of the state's elected officials. Failing oversight by the people, said government officials are free to do as they please -- and that wrecks havoc with the concept of democracy.

Regardless of where you live in the free world, the possible closure of the Georgia State Archives is an affront to your participation in a democratic society.

THE BACK STORY
News came last week that the Georgia State Archives is closing its doors to the public effective 1 November, with the exception of a few appointments when staff is available. Yesterday, the Atlanta-Journal newspaper reported a "firestorm" has erupted over the decision. Quoting the Secretary of State Brian Kemp:

"To reduce public access to the historical records of this state was not arrived at without great consternation,” Kemp said. “I will fight during this legislative session [starting in January] to have this cut restored so the people will have a place to meet, research and review the historical records of Georgia.” Source: Supporters Rally Against Georgia Archives Closure.

January? Seriously? This closure must be stopped now. Georgia State Archives has already cut back service hours to include Friday and Saturday-only research during the past year.

The A-J newspaper also reported: "Effective Nov. 1, only limited public appointments will be available to see the state’s important and historical records dating to at least 1733. In addition, the archives’ staff of 10 full-time employees will likely be reduced."  Source: IBID.

WHAT CAN YOU DO ABOUT IT?
1. Please sign Georgians Against Closing State Archives' petition at: http://chn.ge/Omcycy

3. Write to your Georgia General Assembly senate and house representatives. Snail may be more effective than email. http://www.legis.ga.gov/en-US/default.aspx

FINAL THOUGHTS
Ol' Myrt here knows times are tough, but we're talking a budget cut of $730,000 that closes the Georgia archives. The Georgia General Assembly must find a way, unless it prefers to hang it's head in shame and turn it's back on our citizens' basic right of open access to government records. The GSA website states it "is one of the largest state legislatures in the nation". Let's add "the smartest" when they figure out how to balance their budget and maintain basic citizen rights.

Posted by DearMYRTLE on Monday, September 17, 2012