DearREADERS,
Despite a straight-forward name like Newspapers.com, announced a few minutes ago by its parent organization Ancestry.com, several questions come to mind about this new US newspapers website. Most significantly, why would Ancestry spin off a newspaper collection when "newspapers" are a significant part of Ancestry.com's World Deluxe and other membership plans at Ancestry.com? Probable answer: More paying subscribers ($75US annual) and a different "doorway" for folks to find an Ancestry.com property.

Ol' Myrt pays for an $299 annual subscription at the "World" level, which includes both a US Newspaper and UK Newspaper collection. 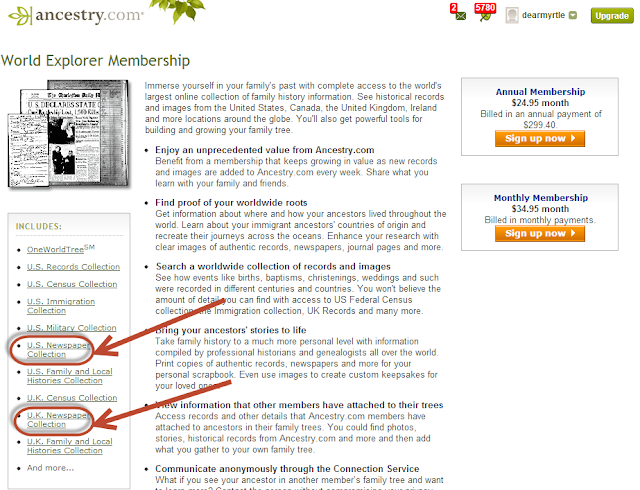 Source  of screen shot above:
http://www.ancestry.com/subscribe/products/?p=world_deluxe 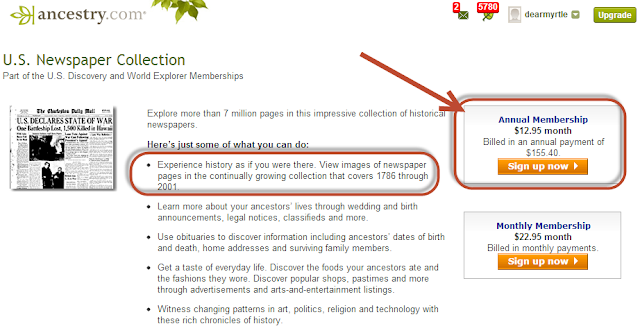 Source  of screen shot above: http://www.ancestry.com/subscribe/products/?p=us_news&spotId=4&sub=32768

It would appear from the landing page description at the new Newspapers.com website that the collection is US newspapers, covering the 1700s-2000s (see screen shot below), and it is roughly the same as the description of the US Newspaper Collection at Ancestry.com (per screen shot above).

ARE US NEWSPAPERS AT ANCESTRY.COM AND NEWSPAPERS.COM THE SAME THING?
It would appear so, though I'd like a line item comparison of the Ancestry.com newspaper collection titles with those at Newspapers.com. Me thinks the 1,000 titles listed at Ancestry.com may include 200 "web" searches, if this listing from the catalog is any indication. (See below.) 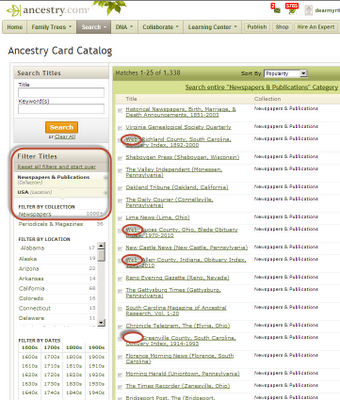 SUGGESTIONS
Scenario 1: If the newspapers collections are indeed the same, Ancestry.com should provide free access to its World and US Newspaper Collection subscribers at their new web property Newspapers.com. This affords us a different "skin" or "interface" with which to find ancestors. However, if the search algorithms are the same at both sites, it won't matter, but access would be nice for comparison purposes.

SIDE COMMENTS
I think it's all about the number of paid subscribers. If Ancestry.com can spin off parts and require membership, then it is the "owner" of more subscriber sites, even though many of those subscribers are duplicates. Why not just KISS and make it Ancestry.com period?

NOTE from DearMYRTLE: The following was received from our friends at Ancestry.com. Please address all inquiries to support@Ancestry.com. 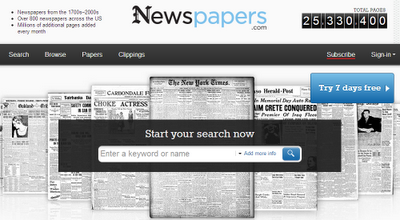 Comprising more than 25 million pages, Newspapers.com offers a trove of historical and present-day newspapers ranging from the New York Times to treasured small town and local newspapers throughout the United States.

Interested users will find centuries of amazing news articles and photos now captured online when browsing hundreds of years of breaking news headlines, searching for information about an ancestor or reading how the media addressed moments in history like the day Charles A. Lindbergh flew over the Atlantic, the opening of Disneyland or news from the fronts during World War I and World War II.

“We’re extremely excited about the launch of Newspapers.com because it offers historical value for people of all ages and areas of interest,” said Brian Hansen, General Manager of Newspapers.com. “Searching newspapers is like searching the Facebook footprint of the past. Not only can you find information on births, marriages and deaths, but you can also get a glimpse into what life was like during a specific era. We hope our users have fun making their own discoveries in this great newspaper collection that will continue to grow over time.”

The search capabilities on Newspapers.com are specifically designed for newspapers enabling users to easily search by keywords, location, time period and newspaper name. From the 1784 Newport Mercury newspaper to a 2009 edition of The Gettysburg Times, users may find old advertisements or job listings, laugh at comics, retrieve family history clues or learn about famous events through the eyes and words of the time period.

The user experience is also enhanced by an image viewer that serves up crisp, high-quality images of the newspapers. Once discovered, newspaper images can easily be clipped, saved and shared via social outlets such as Facebook, Twitter, Pinterest and Google+.

Within this growing newspaper collection are a myriad photos and stories that provide unique perspective on history. Examples include:

·        Abraham Lincoln – Abraham Lincoln’s death is noted as “Our Great Loss” in the April 16, 1865 edition of the New York Times
·        Interesting People – The first baby picture of John Jacob Astor VI, whose father perished on the Titanic, is posted among other photos including one of Andrew Carnegie in the 1914 New York Times section labeled “Interesting People Seen Through the Camera’s Eye”
·        Price Changes – See how costs have changed over time, for example the New York Times cost one cent back in 1852, a paper that today costs $2.50 for its weekday edition
·        Marilyn Monroe – A Parade article featuring an exclusive interview with Marilyn Monroe in 1952 talked about how the famous actress saw herself
·        Man on the Moon – In 1969, the first U.S. astronaut on the moon as highlighted in the Iowa Estherville Daily News
·        St. Valentine’s Day Massacre – The day after the 1929 St. Valentine’s Day massacre in Chicago, articles all across America followed the story including The Daily Independent

In addition to the historical view this newspaper collection provides, it also peers into the pop culture of American history. Learn about Lita Grey’s marriage to Charlie Chaplin on November 24, 1924 in the Ohio Zanesville Times Signal. Skim vintage advertisements, such as those by Sears, offering customers the opportunity to trade in old tires for a credit toward new ones in a 1952 advertisement in the Arizona Sun Times. Read your favorite comic strip from years ago, like Peanuts, Hi and Lois and even a 1947 Lil’ Abner comic strip where Daisy Mae laments not being a comic strip character.

Newspapers.com provides an affordable glimpse into the past with a yearly subscription rate of $79.95 for subscribers and $39.95 for Ancestry.com or Fold3.com members. Newspapers.com also offers a 7-day free trial that can be activated at www.newspapers.com.

About Ancestry.com
Ancestry.com Inc. (Nasdaq: ACOM) is the world's largest online family history resource, with approximately 2 million paying subscribers. More than 11 billion records have been added to the site in the past 16 years. Ancestry users have created more than 41 million family trees containing more than 4 billion profiles. In addition to its flagship site, Ancestry.com offers several localized Web sites designed to empower people to discover, preserve and share their family history.

NOTE from DearMYRTLE: The following was received from our friends at FamilySearch.org. Please address all inquiries to support@familysearch.org.

Posted by DearMYRTLE on Thursday, November 29, 2012 No comments: