DearREADERS,
What's the good word for for iMac and Parallels users?


During yesterday's "Mondays With Myrt" genealogy webinar, Ellen reported her Legacy Family Tree would lock up when opening Legacy's "Master Source Writer". She was running the Windows-based program using Parallels. Another attendee expressed the same concern. Russ suggested that Ellen report the situation using the "Report a Problem" feature on the Legacy website: 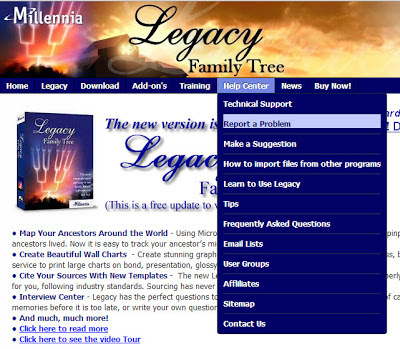 Later in the day Ellen wrote in to explain:

DearMYRTLE,I went back to basics and updated both the Parallels and the Windows software. It worked! It did not lockup the Master source writer. So, that part is fixed.


I've got an email off to legacy technical support regarding dropbox. While I am at it I'm going to try for my "dream set-up" : To have drop box synchronize the changes in the Legacy data as well as all of my images. That way when I want to use my laptop, everything will be up to date. I do not want to work on both computers at the same time in the same software. Too confusing!

Regarding Dropbox, I've used it successfully with RootsMagic so I work on one database as I switch between my desktop in Utah, the desktop in Virginia and the laptop when traveling or presenting. I can foresee no difference with Legacy.

There ARE other Windows emulators out there. Which one do you use, and why do you prefer it?