And why word-for-word transcriptions are essential. (she says humbly!)

DearREADERS,
Last week I mentioned a breakthrough in research using WorldVitalRecords.com. Since then additional items have come to light. Now I've been pouring through the site just looking at newspaper records. In the last fifteen minutes Ol 'Myrt has discovered: 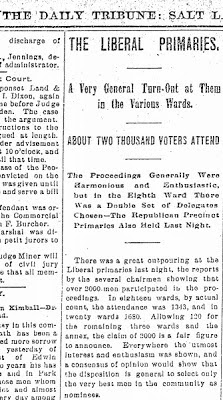 Here's why TRANSCRIBING word-for-word is mission critical. I completely missed a second mention of my paternal great-grandfather until I was typing up this blog post. Keep in mind:

1. I am an active genealogy researcher.
2. I read the newspaper article online.
3. I cropped out this portion of the newspaper report.
4. I had underlined in red the second mention of Alma O. Player.
5. But Ol' Myrt here completely missed the earlier notation that Great-grandpa Alma would serve not only as a delegate but as a judge for his voting precinct..

The obituary for my paternal great-grandfather, Alma O. Player from page 27 of the Thursday, 28 Nov 1925 Morning Salt Lake Tribune where it reads: "Alma O. Player died at the residence, 622 Grant Street, Wednesday, of heart disease. He was born in Salt Lake, December 12, 1861 [1862]. Surviving are two sons Warner Player  of Sacramento, Cal. and Shirley Player, of Seattle, Wash. and four daughters, Mrs. Lucile Roach, Mrs. Ethelyn Burton, Mrs. Nora Richardson and Miss Mabel Player, all of Salt Lake. Mr. Player was engaged in general contracting work for years as an employee of F. J. Moran and was also for a long time a building inspector for the city. 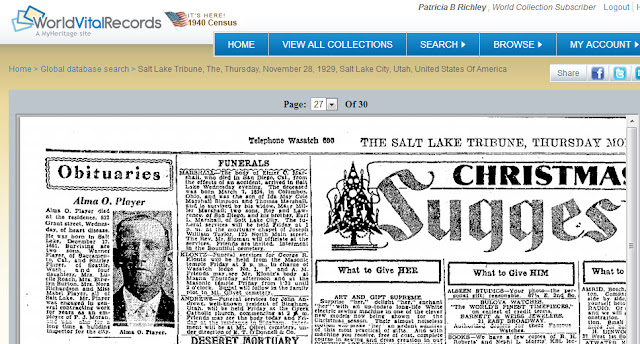 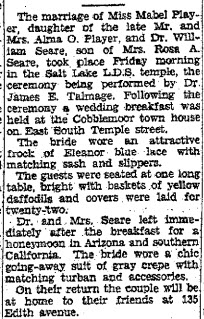 Remember the special offer for World Vital Records membership, or membership extension expires on Monday the 19th. Click here to sign up before this money-saving offer expires.