DearREADERS,
This post is dedicated to the brave men and women who have served their country well during war and peace, and to their families left behind. My own soldier had a career in the US Army, then worked as a civilian employee of the Army. Tender thoughts and prayers of thanks to all.

Surprised Mr. Myrt in honor of Veterans Day by pulling together this collage.

Perusing his family heirlooms, I discovered this cache of items representing Ole J. Sogge's military service in the 1st South Dakota Volunteer Infantry during the Philippines Insurrection. The photo was beginning to curl with age, but luckily buttons that had previously been cut from his uniform were once again called into duty. 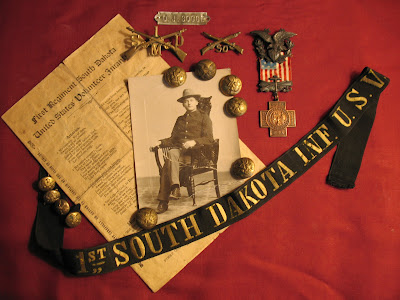 The yellowed paper is a set of words to songs, obviously folded and refolded many times. Mr. Myrt had this neatly preserved in a top-loading sheet protector. What struck me through the camera lens are the words to the first song -- America. 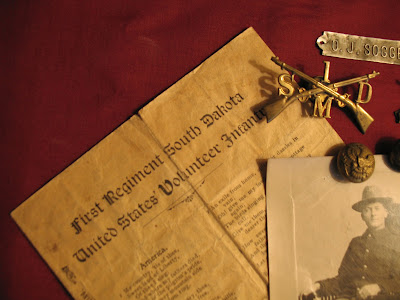 During the shoot, Ole's uniform jacket was retrieved from a distant closet. The little note pinned (aaack!) to the jacket is from Ole's wife Anna to her daughter Grace, (Gordon's grandmother and mother), which reads "Your father's Army jacket 1898 in the Philippines." 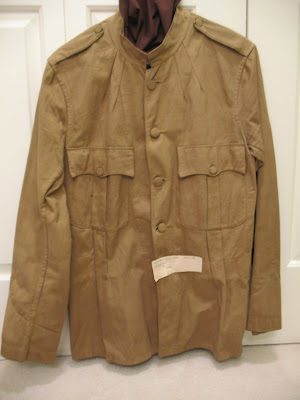 This is the service medal Ole received.

What items have you discovered to document an ancestor's military service?