DearREADERS,
As we gather as families to celebrate Christmas, Ol' Myrt here thinks of those who are in the armed services throughout the world. Family gatherings aren't part of the equation for these folks. Mr. Myrt and I pray for their safe return and for their families who are keeping the home fires burning.

WikiPedia describes Christmas at the time of the American Civil War: "Thomas Nast, who used his editorial cartoons to issue Union propaganda,  made several illustrations reflecting the war. The one for Christmas Eve 1862, which ran in the January 1863 issue of Harper's Weekly shows a wife on one side praying though a window in one circle, and in another circle shows her husband on the battlefield, also in prayer."

Earlier this month James Marten, a Marquette University history professor, blogged about the Christmas experience at the time of the US Civil War. He is director of the Children in Urban America Project: A Digital Archive. "A North Carolina mother reported that she and her husband gave their children mountains of dolls and books and games in 1862, but a year later, with Santa Claus “gone to the war,” they could manage to put a few cakes and coins in their stockings."  Source: Civil War Christmas

Mr. Myrt and I are fortunate to have inherited two beautiful ceramic Christmas trees made by his mother, Grace Louise (Sogge) Erickson. 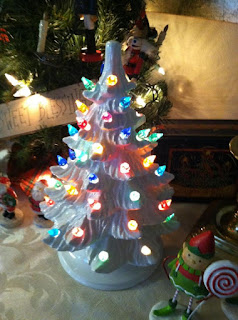 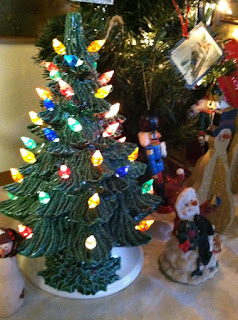 Through good times and bad, parents do their best to make Christmas magical for their children and grandchildren. This year, we will gather to read  our traditional Dr. Suess' "How the Grinch Stole Christmas" and the story of the birth of the Christ child from the New Testament. Perhaps you will enjoy this video featuring the Mormon Tabernacle Choir and Jane Seymour as they celebrate "the light that fills even the dark corners of life".

As I look at this new ornament made for us with love by Gordon's sister, JoAnne (Erickson) Knapp, I pray the angels in heaven are watching over you and your loved ones this holiday season. 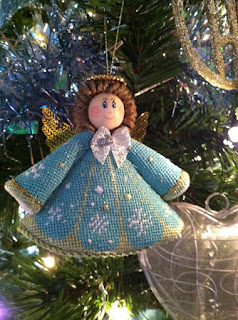