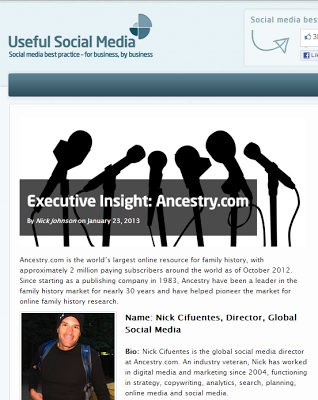 I cross-posted the link to the blog post on my DearMYRTLE Facebook page, and stated "If he's Ancestry's social media guru, and he hasn't reached out to me, does this mean I've lost my edge, impact and reach? (Sigh)"

Here's how the comments went - no editing. Just the facts, though I have highlighted the quote from the article in red below.


So, I wonder IF Ancestry.com is listening, now that Tony Macklin, one of their best programmers, has left?

Ancestry.com has rich content, but they aren't letting folks know about it aggressively enough. Me thinks Ancestry got way-laid, thinking about national advertising during the sponsorship of WDYTYA NBC broadcasts. Well, that was then. This is now. Hire a social networking guru or two who can manage a good Twitter feed, spice it up with a new document image every hour or so. And then actually relate to potential users using this and other social media networks. You've got the potential with over 25,000 BYU college students nearby. Surely they will know how to build interest among a whole new set of potential members.

[Setting aside my riding crop, stepping down off my soap box, and demurely resetting the netting on my hat.]