DearREADERS,
My paternal grandfather Shirley Player died 15 March 1942, nearly a decade before Ol' Myrt here was born. So the paternal "grandfather" I knew was Harold C. Severinson. From Ancestry.com I've found the marriage record of Harold to my grandmother Myrtle transcribed as follows, with the handwritten portions indicated in italics below:

IN TESTIMONY WHEREOF, whence the signatures of the parties to said ceremony, the witness and myself, this 30 day of June A. D. 1945. 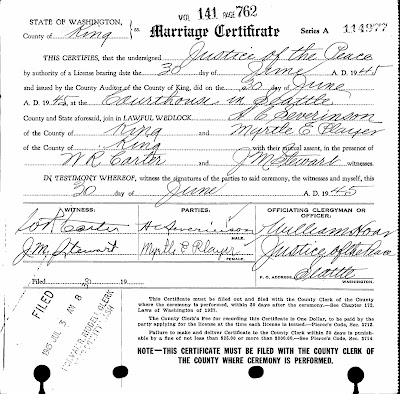 Though to my knowledge no picture from the wedding day remains, I do have this great pic of Harold taken about the same time. Pictured left to right are Ray, Ole and Harold Severinson. Ray is Harold's brother and Ole is their father. I wonder if they had gathered for the wedding ceremony?

I don't ever remember seeing Grandpa Harold in a suit. He wore wool plaid shirts and smoked cigarettes. I remember his bean bag style ash tray perched on the arm rest of his chair in the living room, just like the one pictured below, available at an Etsy store right now as a "vintage" "retro" item. Who knew then what damage could result from second hand smoke? 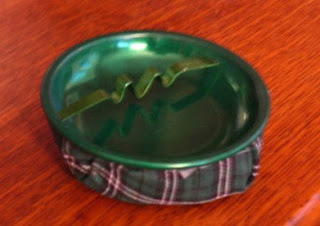 I heard from my cousin on Grandma Myrtle's side and from my Dad, a young Army physician at the time, that Harold had a drinking problem, so Myrtle took him away to live an isolated life out in the country in Longview, Washington, away from all the "bad" influences. But of course, I knew nothing of this as a child. Later, when I visited with Grandma Myrtle and Grandpa Harold in the 1950s and 1960s it was at their home in Puyallup, Washington. There was always a six pack of beer on the back steps.

On cold, rainy "Pacific Northwest" mornings Harold would arise early to stoke the fire in the coal furnace down cellar. There was no forced air heating or even those steam heat registers in this home, pictured in my blog titled Grandma Myrt's home in Puyallup. Instead the heat would rise naturally to the main floor of the home through a 12 inch by 36 inch wooden floor grate  in the hallway similar to this one.


My brother Mike and I would always vie for the prime position over the heat vent. I loved to stand on the grate and let the heat soothe my cold legs. The rising air was strong enough to "poof out" my Lanz of Salzburg flannel nightgown. Remember those?