DearREADERS,
Darlene Steffans had us mesmorized by options in Google's free Picasa photo software we hadn't considered before -  in particular using the "people" option to have Picasa do a bit of facial recognition detective work.  Darlene explained she had received an old photo album. She and her sister-in-law had carefully removed each photo, naming each in a spreadsheet to preserve the layout and pages. Preserving these can be helpful in identification and time line considerations.

As Darlene and her sister-in-law worked through the project, they were able to ask certain older family members who was in each picture.

It was fascinating to see how to review potential image matches and either accept or override Picasa's suggestions. It helped to be able to click and view the full image where Picasa had picked out one individual for a match to other photo images in the file. Context is everything, isn't it? 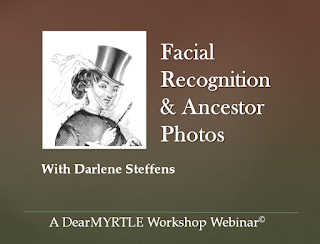 Posted by DearMYRTLE on Wednesday, February 13, 2013