Archived: Getting into Google Plus Webinar

DearREADERS,
Once the internet access was u p and running again this evening, Ol' Myrt here has been quickly uploading archived webinars. This one was from yesterday's webinar where I explained why I am  making the move from GoToWebinar to Google+  (G+)  Hangouts on Air (HOA).

I also explained the transition process I've designed during February so there is plenty of time to get familiar with G+ Hangouts On Air.

1 SECOND DELAY AT MOST
I just heard from Mark Olsen of MyHeritage.com that he ran tests today and determined that there is less than a second delay between what the JOINer (panelists) are saying live in a Hangout On Air, and what the VIEWers are seeing and hearing. Thanks Mark! 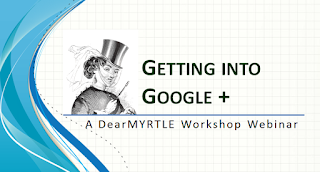 FREE: Here's the link to the archived webinar. Remember this is a large file to download, so be patient:
http://www.DearMYRTLE.com/webinars/2013/GettingIntoGoogle.wmv

LINKS WE MENTION
DearMYRTLE's Genealogy Community on G+
(where you get the link to possibly attend as a JOINer, and to post comments if you are a VIEWer)
https://plus.google.com/u/0/communities/104382659430904043232

DearMYRTLE's YouTube Channel
(where you'll go to click "Feed" and then VIEW the live Hangout On Air when it starts at the appointed time. You may also go here later to VIEW the archived version, usually available within 30 minutes of the end of the recording session.)
http://www.youtube.com/dearmyrtle

Posted by DearMYRTLE on Wednesday, February 13, 2013