DearREADERS,
We were so busy doing Hangouts we completely forgot that it's been 1 year since we began hosting Mondays with Myrt. Yup! The 8 October 2013 Mondays with Myrt is archived here. We started using GoToWebinar, but quickly outgrew the room. Fortunately, Cousin +Russ Worthington and I learned from +Tessa Keough that Google+ Hangouts have progressed from the early days, and now provide a stable platform where a lot of good GeneaConversations are happening.

Here's the lineup for today's Mondays with Myrt, which starts in about 45 minutes. Directions for JOINing and VIEWing follow this  list.

Why Crista Cowan, the Barefoot Genealogist should get a raise. (In which we solve the mystery of where to click to find the link to source info on this Ancestry.com image.) 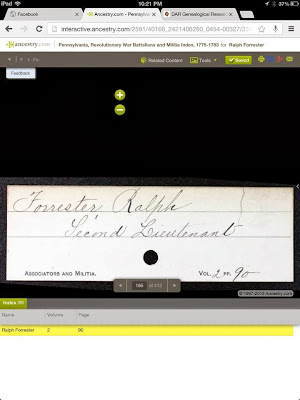 Scanning Documents - a Google+ conversation with Olle Andersson from Sweden. This topics concerns genealogists throughout the world. 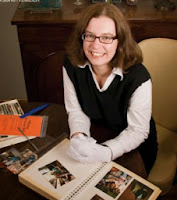 Sally Jacobs, The Practical Archivist is hosting a webinar "3 Secrets Every "accidental ARchivist" Needs to Know. Sunday 3 Nov 2913 3:30pm Central (Chicago). We've got to get this on the www.GeneaWebinars.com Calendar!

GeniAUS (as Ol' Myrt likes to type it!) Jill Ball is hosting a regular Hangout for genealogists, with the accent on Australia. See her blog post It's time to bit the bullet about this venture. Join the next scheduled event by visiting this G+ site. We've got to get this on the www.GeneaWebinars.com Calendar!
Michelle Entrop has a question about creating a client report. We've got several suggestions for her as she writes "Thank you so much your weekly hangout!!!  I've been working on my first client report, modeling after the Sosa-Stradonitz System in the BCG Standards Manual.  Spending HOURS upon HOURS manually numbering every fact in the text, numbering the reference note at the bottom of that page, managing if it's the full or short reference note, renumbering when I add one more fact.  Does any genealogy software automate this in an way?  Thanks again!"


Book of Me Hangout hosted by Julie Goucher is scheduled for tomorrow, 29 October at 10am Mountain time, that's Noon Eastern.


John Laws has a question about his One Name Study work. See his post reproduced here:

I have been continuing the extraction of LAWS from England & Wales, National Probate Calendar (Index of Wills and Administrations), 1858-1966 and have found an anomaly that I could do with a bit of help with.

We have a Thomas Francis Cresswell Laws he was a Ships Steward born 1837 who appears in shipping records in Sydney Australia as serving on the steamship "Wonga Wonga" between Melbourne & Sydney in 1863.

But when I looked at FMP & Ancestry.com for the death record I find the index refers to a Thomas F B Laws as dying in Worthing in 1961 even the original record gives it as Thomas F B Laws aged 31 so obviously I suspect that the entry in the GRO death index has been transcribed incorrectly

and the entry in the Probate Calendar is correct and that he is some relation to the ships steward, we have a number of the The Cresswell Laws family  who came from Middlesborogh including a Thomas Cresswell LAWS born 1870 died 1951 at 24 Warwick Gardens Worthing so not him either but oddly married to Muriel.
Let's talk about this on Mondays with Myrt who's coming week +Russ Worthington. This is precisely what inferential genealogy is all about. We have to resolve conflicts like this to get proof of an individual's identity. You've done 90% of the work here +John Laws, so this will be interesting.

I'd also like to have +Claire V Brisson-Banks, an expert of British research join us with suggestions. ﻿

A Halloween Fright - What Mr. Myrt discovered when changing out the stove in our kitchen. 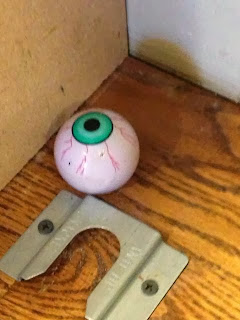 HERE'S HOW TO PARTICIPATE
We are using Google+ Hangouts On Air for this event.

Noon Eastern US (New York)
11 am Central US (Chicago)
10am Mountain US (Denver, Salt Lake City)
9am Pacific US (Los Angeles)

HERE'S HOW TO JOIN
The first ten people who JOIN will appear on the panel and must have voice and video capabilities. The exact link cannot be shown until the Hangout is created. Standby at DearMYRTLE's Genealogy Community on Google+ located here:
https://plus.google.com/u/0/communities/104382659430904043232

If you attempt to join, and receive the notice that the Hangout is full, then go to the VIEW option listed below.

HERE'S HOW TO VIEW THE EVENT LIVE
You may VIEW the Hangout live on DearMYRTLE's YouTube Channel located here:
http://www.youtube.com/user/DearMYRTLE/feed

The Hangout will not start appearing here until I press the record button at the top of the hour. It may take a minute for the video stream to kick in.

HERE'S WHERE ALL MAY POST COMMENTS
If during the live broadcast of this Hangout On Air you'd like to post comments do so back at DearMYRTLE's Genealogy Community on Google+, perhaps on a different tab on your web browser. Ol' Myrt's community is located here:
https://plus.google.com/u/0/communities/104382659430904043232

IF YOU MISS THE LIVE HANGOUT OR WANT TO WATCH LATER
The archived version of a Google Hangout On Air appears usually within 30 minutes of the close of the recorded session. You will find it on DearMYRTLE's YouTube Channel:
http://www.youtube.com/user/DearMYRTLE/videos