DearREADERS,
While innocently browsing vintage postcards on eBay, Ol' Myrt here discovered the idyllic Puyallup, Washington she knew as a young girl visiting Grandma Myrtle in the late 1950s was the site of an "assembly center" for up to 8,000 Japanese Americans during World War II. What a difference a decade makes.

While I know of the large population of residents with Japanese ancestors in the Pacific Northwest, and about the forced removal of US citizens to such "camps", I hadn't realized Puyallup figured prominently in this dark history of the state of Washington. I decided to learn more.

Back in November 2006, I reported on my reading of LOOKING LIKE THE ENEMY by Mary Matsuda Gruenewald relating experiences of her Japanese-American family #19788's imprisonment at internment camps during World War II. Mary and her brother Yonechi were born in the US to Japanese immigrant parents who came to the US with the hope of a better life.

Mary's idyllic childhood on her family's Vashon Island raspberry farm abruptly ends as thousands of innocent Japanese Americans were rounded up and sent in filthy, half broken-down rail cars to live in barbed-wire camps following the bombing of Pearl Harbor. She writes "As a carefree teenager about to be thrown in the chaos and devastation of Word War II, I had no idea how these Japanese values would sustain me and my family and give us strength to endure."

HistoryLink.org, Free Online Encyclopedia of Washington State History reports "The assembly center was a temporary facility into which Japanese Americans, known as Nikkei, were forced to gather beginning in March 1942, following U.S. President Franklin Roosevelt's (1882-1945) Executive Order 9066, which set into motion the expulsion of 110,000 Japanese Americans from the West Coast. The mass expulsion forced some 7,500 people from Seattle and the rural areas around Tacoma into the assembly center, where they remained in crowded conditions until their transfer to permanent "relocation centers" (inland prison camps)."

Interview with a unidentified Japanese American woman about the Puyallup Assembly Center. Interviewer: Anne O. Freed. Interview date: 17 April 1943. Transcribed at the University of Washington Library site. The Interviewee was described as follows:  "Miss D. is a very mature, responsible individual, probably in her late twenties. She comes from Seattle. Previous to evacuation she was a secretary in the public school system. She was given a good deal of responsibility for Japanese problems in one of the schools. She speaks, reads, and writes the Japanese language quite well and frequently acted as interpreter for the principal." (1) 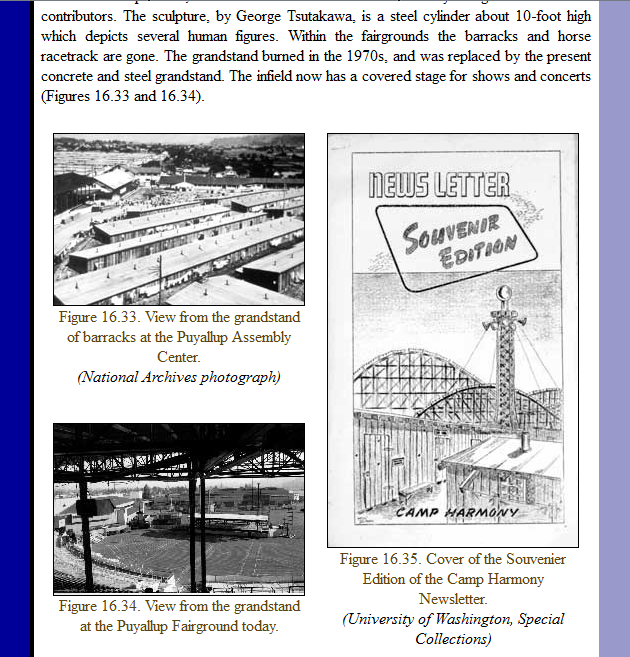 As we discover tragic stories in our family histories, we feel to honor those who endured. We must tell the stories as objectively as possible, using eyewitness reports and documents created at the time of the events wherever possible. The courage of our ancestors lives on as we share this information with their descendants, and more importantly as we resolve to lead kinder lives, respecting all with whom we have the privilege to meet.

We cannot erase the past, but we can create a healthier, happier future for our children.

Posted by DearMYRTLE on Saturday, November 02, 2013