DearREADERS,
You may have heard about the new "little book" called Genealogy Standards. You'll want a copy for your own periodic review. The following press release was received this morning from the Board for Certification of Genealogists (BCG), and includes a notation about comparison charts of the old and new standards. I had to click around a bit on the BCG site to find them, so here are the direct links for the benefit of my DearREADERS:

"BCG first codified genealogical standards in The BCG Genealogical Standards Manual in 2000. It updated, reorganized, expanded, and clarified those standards in Genealogy Standards in 2014. These two charts offer a comparison of the new and old standards for users wishing to familiarize themselves with the changes." 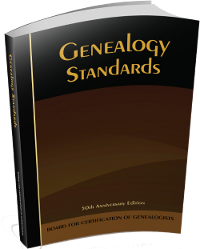 DATE: 3 March 2014
The Board for Certification of Genealogists (BCG) has announced adoption of its new standards manual for use in its evaluation process.

Effective today, new applications for certification will be evaluated against the new Genealogy Standards, a major revision of genealogical standards released by BCG in February. Individuals who have already submitted a preliminary application are exempt from this change unless they elect otherwise or apply for an extension. The newly revised standards will also be used to evaluate the work of existing BCG associates whose renewal applications are due after February 2015.

Eighty-three standards in the new manual establish criteria for all phases of genealogical work, including documentation, research planning, data collection, reasoning from evidence, writing, lecturing and continuing education. The standards reflect the same principles as those originally published in The BCG Genealogical Standards Manual fourteen years ago but are reorganized, updated, expanded and clarified.

BCG’s announcement is accompanied by release of a new application guide. The new guide makes no changes to the type of work applicants for certification must submit but has been updated to reflect the new standard manual’s renumbering of most standards. The rubrics, an evaluation tool used by BCG’s judges, have been similarly revised.

To help researchers familiarize themselves with the recent changes, BCG has also released two charts that compare the new and old standards. They can be downloaded from the “Skillbuilding” page of BCG’s website at http://www.bcgcertification.org/skillbuilders/index.html.

BCG, an independent credentialing body, was founded in 1964 to promote standards of competence and ethics among genealogists and to publicly recognize individuals who meet those standards. It certifies genealogists in two categories, a core research category, Certified GenealogistSM, and a teaching category, Certified Genealogical LecturerSM. The standards it has articulated are widely recognized as benchmarks for all genealogists who wish to produce accurate research, not just for those seeking certification.

The new manual is billed as a fiftieth-anniversary edition to celebrate the board’s fifty years of dedication to genealogical excellence. Genealogy Standards, fiftieth-anniversary edition (Nashville, Tennessee: Ancestry, 2014), may be ordered by visiting http://www.bcgcertification.org/catalog/index.html. The BCG Application Guide, 2014 edition, and the revised rubrics can be downloaded from the BCG website for free.

Whether you plan to take clients or to pursue genealogy research as a hobby, adhering to Genealogy Standards ensures your work is "up to snuff".