WWII: Stories of the Lost

DearREADERS,
As we consider the 70th anniversary of D-Day and the Battle of Normandy, Stories of the Lost brings home the very personal story of Jennifer Holik's family members who did not return from their WWII service, giving that last full measure of devotion.


May 8, 2014 – Chicago, Illinois.  Jennifer Holik announces the release of her latest book, Stories of the Lost, the first in a new series on World War II records and stories. 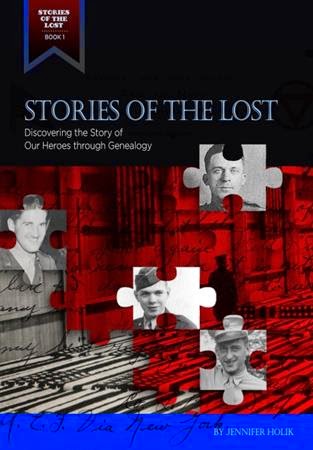 Imagine sending your son off to war. Will he return unharmed, unchanged, and whole? How long will he be gone? Will the war last forever? Will he return? Standing in front of you at the railroad station is a young man in uniform. He looks so handsome, so strong, and full of life. You hug him tightly before he boards the train. You wave goodbye and he’s gone.

Years later your son returns from the war. He arrives not walking off the train, but carried off in a flag draped casket. Dead almost four years now and buried in a foreign land, you did not know where he was buried for almost two years after he was killed. Your son is unable to tell his story of war. Who will tell his story?

This book is a collection of stories about my relatives, Michael Kokoska, Frank Winkler, Robert Brouk, and James Privonzik, who left by train to fight for our freedom and never returned. Three of the men were brought home after the war ended. One however, still sleeps in that foreign soil. It is also the recognition of the men who cared for them after death. The stories of the lost found through the military record.

Stories of the Lost is available through the author’s website: http://jenniferholik.com  where you can also find a new World War II Toolbox! Also visit Jennifer’s Generations Blog for more information on military records and her Military Memories writing prompts available all month.

About Jennifer HolikJennifer is a genealogical, historical, and military researcher. Jennifer lectures throughout the Chicagoland area on World War II records and stories, women during World War II, kids genealogy, and Italian genealogy.As a researcher and writer she can help you research and piece together the stories of your ancestors, particularly if they served during World War II.Jennifer volunteers as the Genealogy Department Manager at Casa Italia in Stone Park, Illinois.  There she hosts monthly genealogy and writing programs and works in the Italian American Veterans Museum.